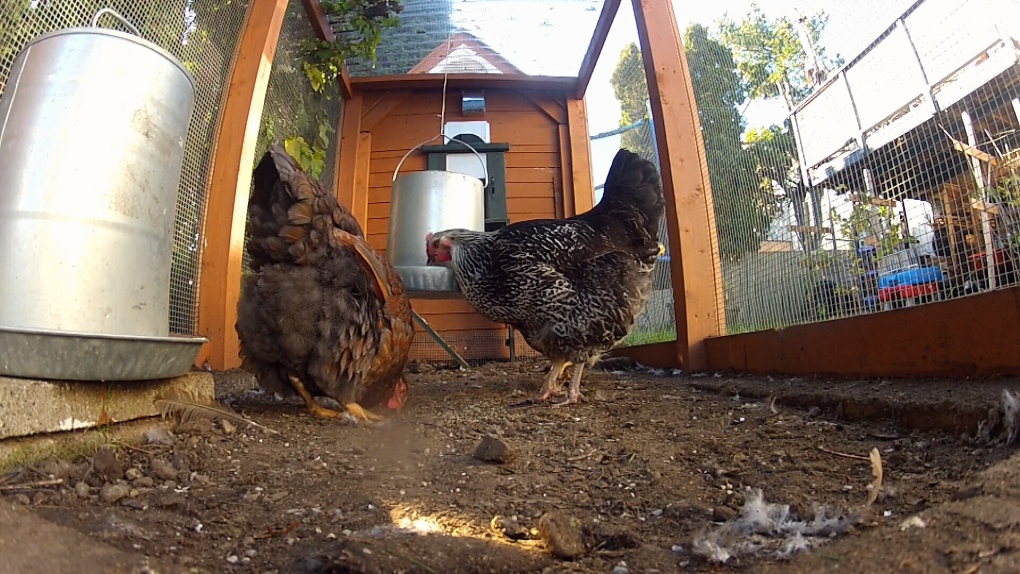 The "Rent The Chicken" service rents out coops, laying hens, chicken feed and food and water dishes to those who want backyard chickens, but aren't ready to commit full time to raising them. Nov. 19, 2015. (CTV Vancouver Island)

A new service aimed at homeowners with commitment issues is bringing farm-fresh eggs and honey to Victoria backyards – for rent.

Bees Please Farms, the brainchild of local entrepreneurs Kate and Mike Fraser, has partnered with Pennsylvania-based Rent The Chicken for a delicious new take on the sharing economy.

The company rents out egg-laying hens as well as bee colonies to customers who aren’t equipped to raise the animals year-round.

“If you’re not sure if you want to commit, you give this a go instead, renting. So you’re getting to try it out without the commitment of either buying or raising the chickens, which can be difficult,” Fraser said.

The cost for the service, which ranges from $425 to $1000, includes coops, laying hens, chicken feed, food and water dishes and instructions on how to care for the chickens.

The birds live in the customer’s backyard during laying season from May to October – when they’re picked up and returned to a farm for a well-deserved rest.

But what happens if you get attached to your new feathered friends? Not to worry, the company also gives the option of adopting the animals outright when October comes along.

The price varies from $425 for a two-hen package, which lay between 8-14 eggs per week, up to $1,000 for four hens and four hives, but Fraser said the service isn’t just meant for people who want fresh eggs.

“You’re getting the manure, which, strangely, I was quite excited about,” Fraser said. “They do great pest control if they’re out in the garden. They’re fun for kids, they teach responsibility. And then the eggs, I think, are the icing on the cake.”

She also offers what she calls “hive hosting,” a service where homeowners who want bees can rent backyard colonies that Fraser services herself.

So far, customers have been buzzing over the unique service.

“The bees, we had definitely a limited number that we could do, and in a week-and-a-half we already reached our maximum, so I’ve started taking deposits for the next year,” Fraser said.

The City of Victoria permits homeowners to keep poultry on their property, but roosters are prohibited and it is unlawful to sell or advertise eggs for sale.

With a report from CTV Vancouver Island's  Chandler Grieve