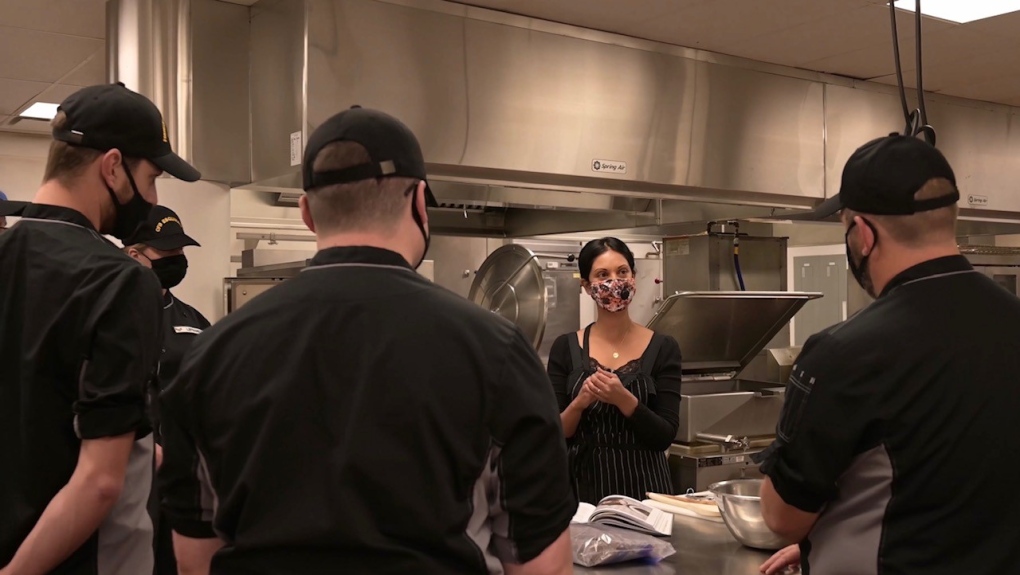 Ruwan Samarakoon-Amunugama, author of the first Sri Lankan cookbook to be published in Canada, speaks with cooks from CFB Esquimalt: (CTV News)

VICTORIA -- Navy cooks at Canadian Forces Base (CFB) Esquimalt are broadening their food palettes this week during the Navy’s “Food Diversity Week,” which runs from Oct. 26 to Oct. 30.

It’s a week-long celebration of diversity and inclusion inspired through food at the base. Cooks from CFB Esquimalt will be learning new dishes and techniques to incorporate into the Navy’s own menu.

“Food is this universal unifier,” said Captain (Navy) Sam Sader, CFB Esquimalt Base Commander, on Monday. “We see diversity as a strength in the Royal Canadian Navy and we want to be more representative of the diversity in our defence team.”

“We are more than 7,000 members here at work at Canadian Forces Base Esquimalt and we want to make sure that our Navy menus incorporate some of that diversity,” he said.

The week kicked off with traditional Sri Lankan cooking. Two dishes – chicken curry with Sri Lankan roasted curry powder and a beetroot curry – were being taught to the base cooks by Sri Lankan cookbook author Ruwan Samarakoon-Amunugama. Her newly released book, Milk, Spice & Curry Leaves is the first Sri Lankan cookbook to be published in Canada.

“To be invited here today and to help train some of the cooks for the Royal Canadian Navy has just been a surreal experience,” said Samarakoon-Amunugama on Monday.

“To know that one day, that those dishes that I’ve trained them to prepare will be served, is a huge honour,” she said.

The cookbook author describes Sri Lankan cuisine as a blend of cultures.

“The flavours are reflective of our colonial past, so (there are) Portuguese, Dutch and English flavours that made their way into the cuisine as well as more modern Asian influences,” she said.

CFB Esquimalt’s team lead cook for Food Diversity Week was joined by five other members of the navy’s culinary collective to absorb all they could from their guest chef. They say the food didn’t disappoint.

“It was amazing. The flavours and everything in the cuisine was just unreal,” said Master Sailor Ryan Eves, a CFB Esquimalt Cook.

Eves says he was honoured to be part of the event today and gained a whole new appreciation for Sri Lankan food. He says he looks forward to using what he’s learned in future creations.

“The herbs, the cooking techniques and everything else; the members will put this into play,” he said. “We can enhance a lot of the curry dishes and stuff that we do now by the way that she showed us and the way that she uses the herbs and spices.”

“I think overall it will be very beneficial to the military and for the cooks,” said Eves.

Some of the other cultural cuisines on the menu for this week include Chinese, Lebanese, Greek and Italian.

“It’s also an opportunity for everyone else to learn through culture because you know you can learn so much through sharing food and coming together over food,” said Captain Sader.

“We have a very diverse defence team. We want to celebrate that diversity, we want everyone to feel welcome, feel inclusive and be able to share that strength that they bring from their own cultural background to the team here at CFB Esquimalt,” he said.

Samarakoon-Amunugama says she spent lots of time in the kitchen learning from her mother when she was growing up and hopes to pass on to others an appreciation of Sri Lankan food and culture.

“I think it’s not only leaning about a new cuisine, but also learning about how to take it home, bring it home and then bring it to the ships or the bases as a way to connect with your families and your community,” she said.