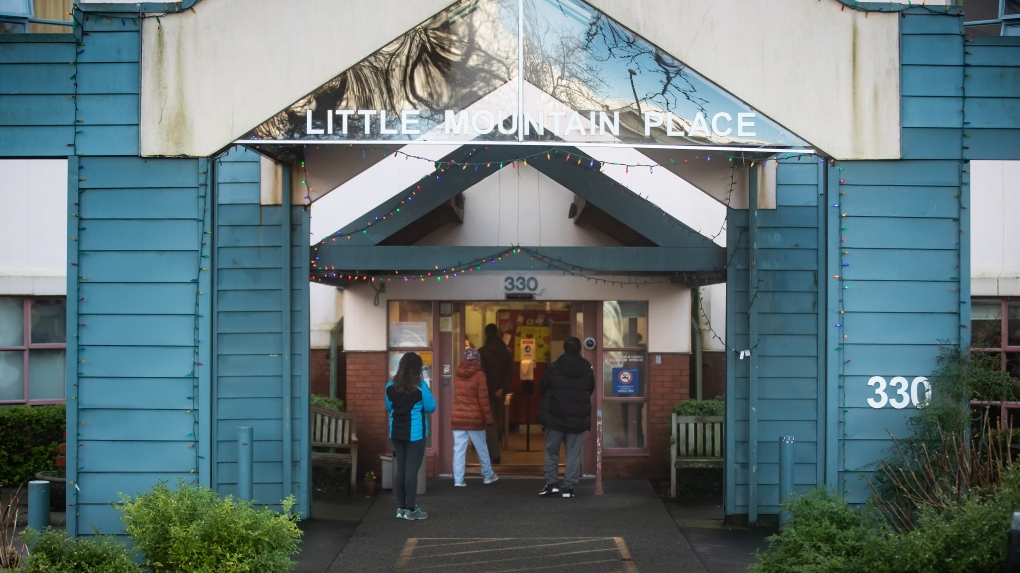 People wait to be screened before entering Little Mountain Place, a long-term care home that has had 38 residents die since a COVID-19 outbreak was declared at the facility in November, in Vancouver, on Sunday, January 3, 2021. Staff in long-term care homes across Canada are struggling to isolate elderly residents with dementia during COVID-19 outbreaks, accelerating the deadly spread of the virus, experts say. THE CANADIAN PRESS/Darryl Dyck

VANCOUVER -- Staff in long-term care homes across Canada are struggling to isolate elderly residents with dementia during COVID-19 outbreaks, accelerating the deadly spread of the virus, experts say.

These vulnerable residents have a tendency to wander as well as a need for social connection and physical touch, leading them to enter other patients' rooms or common areas where they could contract or transmit the virus, say doctors and advocates.

“It's a significant problem in the time of COVID-19 and long-term care,” said Laura Tamblyn Watts, CEO of CanAge, a national seniors advocacy group.

“It's also quite inhumane to be locking people up in their rooms. Older people with dementia in long-term care are not prisoners,” she added. “The good news is there are some things we can do to help support infection prevention and control while at the same time not isolating seniors exclusively in their rooms.”

The novel coronavirus has taken a lethal toll on Canadians living in long-term care homes. More than 3,000 of Ontario's over 5,000 deaths have been in these facilities, as have more than 600 of British Columbia's roughly 1,000 fatalities. Overall in Canada, residents of these homes account for 10 per cent of total cases and 72 per cent of deaths.

A woman whose grandmother died of COVID-19 in a Vancouver care home has raised the alarm about residents wandering during outbreaks. Parbs Bains said she was on a Zoom call with her sick grandmother when another resident entered the room and began hugging her and kissing her on the forehead, remaining for several minutes before a nurse arrived to usher her out.

The care home, Little Mountain Place, is the site of B.C.'s deadliest outbreak in such a facility, with 41 dead. But in all long-term care homes with outbreaks in the Vancouver Coastal Health region, keeping residents with cognitive impairments isolated has been a challenge, said chief medical health officer Dr. Patricia Daly.

The health authority advises staff to monitor residents who wander but not to lock them in rooms or restrain them, Daly said.

Tamblyn Watts said 80 per cent of residents of long-term care homes in the country have some form of cognitive impairment such as dementia. Keeping them in one room without social engagement, exercise or daily routines has a negative effect, she said.

She said more staff, not necessarily with medical training but with dementia training, are needed to compassionately intervene when they see a resident wandering and redirect them to a safe area. Ideally, there would be a separate room where residents could walk to other than their own, Tamblyn Watts added.

“It does, however, mean that you need to have people on deck to be able to help with that,” she said.

Quebec announced last year it would hire 10,000 patient attendants to work in care homes and train them over last summer. B.C. and Ontario have also created new jobs in care homes for people without prior experience, but much more hiring needs to be done, Tamblyn Watts said.

She also said more infection control, cleaning, testing and now vaccines are needed, in order to prevent COVID-19 from getting inside care homes to begin with.

But he said there are some ways to help residents with cognitive impairments stay in their rooms, including placing a stop sign by the door or hanging a curtain over the doorway. In some secure units, seniors wear wristbands that ring an alarm when they leave, Wong said.

It's also technologically possible, though not common practice, to place GPS trackers in residents' footwear, he said. Playing a familiar piece of music in their rooms can be comforting and help them remain in that space, Wong added.

He said families could plan to speak to their loved ones virtually at times when they are more likely to get confused and wander, often in the late afternoon or evening for Alzheimer's patients. However, it can be a challenge to ensure that residents understand the people on their screen are their loved ones, he said.

Jennifer Stewart, manager of advocacy and education for the Alzheimer Society of B.C., acknowledged that virtual visits can be helpful for some and confusing for others.

Patients may not be able to understand or retain the information about why they need to be separated from others or be able to follow protocols, such as frequent hand washing, she added.

“I think we're in a really tough spot,” she said. “I don't think anyone's found a perfect solution here.”

However, Stewart said person-centred care is key: looking at each patient as a unique individual and speaking with their families about how to provide them with safety, comfort and meaning.

B.C. seniors advocate Isobel Mackenzie said the primary way that the virus is spreading in care homes is from staff to residents, rather than from resident to resident. Staff are in close physical contact with many different patients, she noted, and many residents are not mobile.

She said, though, that immediately after a single positive case, all residents and employees should be tested and residents should be isolated. Every patient positive for COVID-19 should be kept not only in their room, but as much as possible in a certain section of the home, she said.

Daly of Vancouver Coastal Health said care homes in the region do not automatically do mass testing after a single staff member tests positive. She said testing depends on the likelihood the employee transmitted the virus to others in the home as well as the timing of transmission.

Mackenzie has also called for frequent, routine testing of staff, which B.C. does not do. Ontario tests staff at least every two weeks and has also deployed some pilot projects for rapid testing.

Provincial health officer Dr. Bonnie Henry said B.C. considered whether to periodically send staff to a testing site, as is done in Ontario, but that is very “low yield” and challenging to do. As for rapid testing at care homes on a daily basis, that is “not feasible” with the tests that the province has, she said.

“Our focus has been instead on making sure we have the resources to ensure staffing, particularly if an outbreak has been identified. When an outbreak is identified, testing is done,” Henry said.

The seniors advocate said understaffing is “absolutely” still an issue.

“I think there have been additional strains on an already strained staffing system,” Mackenzie said.

She said family members can be designated essential visitors to be the eyes and ears of a loved one within the care home and flag problems for staff. Some residents don't have family members who are able to play this role but many do, she said.

Mackenzie added that even when dementia patients are isolated, they should be receiving physical touch from staff. Care providers should also use gentle persuasion and de-escalation techniques to assuage any anxieties residents are experiencing, she said.

“If they're mobile enough that they're individually ambulating out of their room in the common areas, they've got some capacity. That is not a person in end-stage Alzheimer's with no capacity to understand anything,” she pointed out.

“It's easy to throw up our hands and say we couldn't do anything, we can't isolate these people because they wander. That is not true of every resident or even of most residents. It might be true of some and we know how to manage that.”

This report by The Canadian Press was first published Jan. 17, 2021.

Women have a higher chance of developing long COVID than men, study finds

273 people in B.C. hospitals with COVID-19 this week as decline slows