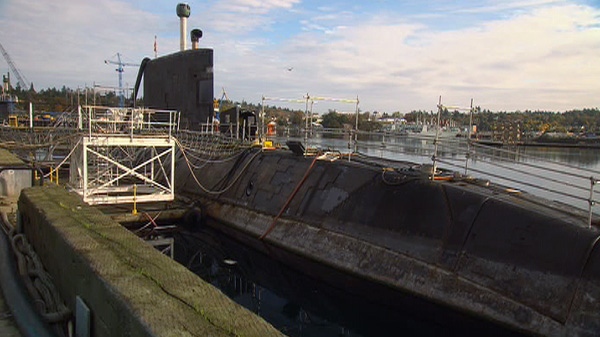 OTTAWA -- One of the Royal Canadian Navy's beleaguered submarines will remain in dry dock an extra year after a leak was discovered in its main ballast tank.

“The tank was immediately depressurized and further testing was put on hold pending an investigation,” Lamirande told CTV News.

The problem was discovered on March 7 and Lamirande says it is being fixed at the maintenance company’s expense.

Babcock Canada was awarded up to $2.9 billion in 2008 to provide in-service support for Canada’s aging fleet of four Victoria-class submarines.

“Babcock Canada Inc. conducted an internal investigation to determine the root causes of the incident, modified its procedural controls, and has since resumed tank pressure testing,” Lamirande said.

Babcock president Mike Whalley confirmed in a statement that the submarine "sustained damage while undertaking testing as part of the vessel's ongoing deep maintenance."

“We continue to work closely with the government of Canada to ensure the deep maintenance and refit of HMCS Corner Brook is completed in the safest manner possible,” Whalley added.

This year was meant to bring a historic return to sea for Canada’s military submarine fleet. While HMCS Victoria has returned to the waters off British Columbia, the COVID-19 pandemic has delayed the return to service of another sub, HMCS Windsor, until early 2021.

The navy now expects HMCS Corner Brook to be ready for service by June 2021, more than a year later than initially planned.

The leak is just the latest challenge to befall Canada's fleet of four submarines, which have spent more time in repairs than at sea since being bought second-hand from Britain in 1998.

The annual maintenance cost for the four subs is approximately $300 million to $350 million per year, according to the DND.

Lamirande did not provide an update on the fourth submarine, HMCS Chicoutimi.