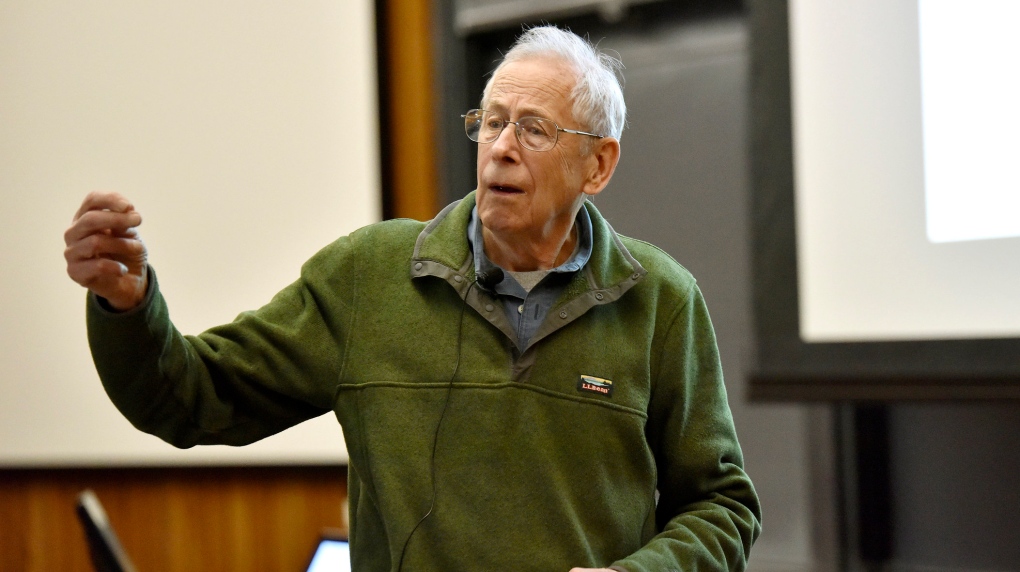 In this 2016 photo provided by Princeton University, James Peebles speaks at the 43rd annual Donald R. Hamilton Lecture, at the university in Princeton, N.J. Peebles was among three scientists who won the 2019 Nobel Prize in Physics on Tuesday, Oct. 8, 2019, for their work in understanding how the universe has evolved, and the Earth's place in it. The prize was given to Peebles "for theoretical discoveries in physical cosmology" and the other half jointly to Michel Mayor and Didier Queloz "for the discovery of an exoplanet orbiting a solar-type star." (Mark Czajkowski/Princeton University via AP)

It will be a busy day full of toasts and celebrations for James Peebles, the Canadian scientist who won the Nobel Prize for Physics on Tuesday, but he said the night will hopefully end like any other - with “a quiet dinner” with his wife.

Peebles, who was born in the Winnipeg community of St. Boniface and has taught at Princeton University for the past five decades, said he is gearing up for what he described as the “aura of the Nobel.”

“You understand, I'm used to a quiet life. It's suddenly not quiet,” the 84-year-old said in a phone interview.

“The staff here, the students, the faculty, will be gathering soon for a toast to me. And this afternoon there'll be a press conference and celebration... I then hope to go home and have a quiet dinner with my wife.”

Notoriously modest and focused on his work, Peebles noted that he's been retired for 20 years but continues to research and teach at a “relaxed rate” because he enjoys it.

“Life will go on,” he said. “I was about to say unchanged. I suppose the aura of the Nobel is such that my life will change, but I don't think I'm going to let it change much.”

The Nobel committee said it gave Peebles the honour because his work is the basis of our contemporary ideas about the universe from the Big Bang to the present day.

He told a news conference earlier on Friday that while awards and prizes are “very much appreciated,” that's not why young people should study the sciences.

Neil Turok, who worked with Peebles at Princeton and now serves as director of the Centre for the Universe at the Perimeter Institute in Waterloo, Ont., described his former colleague as an unsung hero of the field, famous in the world of cosmology but seldom recognized outside of it.

“Normally I would congratulate somebody for winning the Nobel Prize - and of course I do in this case - but today I'd like even more to congratulate the Nobel Prize,” Turok said. “Jim is one of the most modest people in the field. His contributions are frequently overlooked. The experts know you can't oversee him.”

Turok said Peebles founded the subject of physical cosmology, laying out the chemical makeup of the universe at its beginning and later explaining the way that galaxies are formed.

Peebles completed his undergraduate studies at the University of Manitoba before moving to Princeton for graduate school.

He has honorary doctorates from a string of Canadian universities, including the University of Toronto, McMaster University and most recently the University of British Columbia. He is also a fellow of the Royal Society of Canada and the Order of Manitoba.

Peebles, who has dual Canadian-American citizenship, is the author or co-author of five books, including “Physical Cosmology” and “Finding the Big Bang.” He said he has a sixth book coming next year, which maps the history of cosmology, from Albert Einstein to today.

He shares the Nobel prize with Swiss scientists Michel Mayor and Didier Queloz, who won for the discovery of an exoplanet orbiting a solar-type star. Mayor and Queloz announced their discovery of the planet, known as 51 Pegasi B, 24 years ago.

The three men will share a nine-million kronor (C$1.2 million) cash award, a gold medal and a diploma. The laureates will receive them at a ceremony in Stockholm on Dec. 10.

Peebles is the second Canadian in a row to win the physics prize. The University of Waterloo's Donna Strickland picked up the honour in 2018.

This report by The Canadian Press was first published Oct. 8, 2019.