British Columbians to get COVID-19 payments under new bill

VICTORIA -- The B.C. government has tabled legislation to provide British Columbians with COVID-19 benefit payments of up to $1,000 for families and $500 for individuals.

B.C. Finance Minister Selina Robinson says the legislation was tabled Tuesday, following through on a B.C. NDP campaign promise that was a central plank of the party’s Oct. 24 election platform.

Starting on Dec. 18, British Columbians can apply online for the BC Recovery Benefit. Telephone applications open on Dec. 21.

“We expect that people will receive a direct deposit within a number of days of their application,” Robinson said in a news conference Tuesday.

The finance minister said she expects many British Columbians who apply on or near the Dec. 18 start date will receive their payments before Christmas.

“We expect hundreds of thousands of British Columbians to have their benefit deposited directly into their bank accounts before the end of this year,” she added.

The benefit program is expected to cost the province between $1.6 billion and $1.7 billion.

The government will use 2019 income tax data to determine who qualifies for the benefit and where on the scale they land. Residents who did not file a 2019 income tax return must do so before applying.

As an example of the benefit calculations, Robinson said a two-adult family earning $174,500 annually would qualify for a one-time payment of just $10. 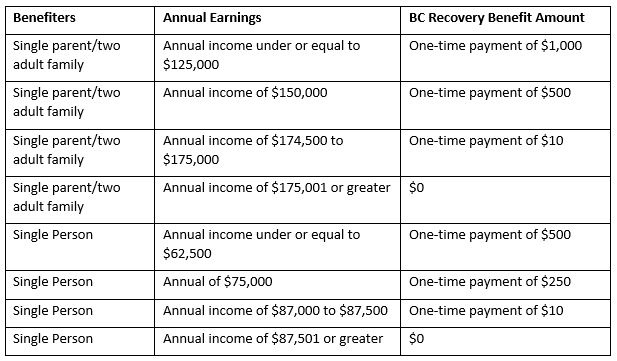 “With the weather growing colder and holidays approaching, we know this can mean an especially hard time for people,” Robinson said.

“This will give people some breathing room and peace of mind,” she added.