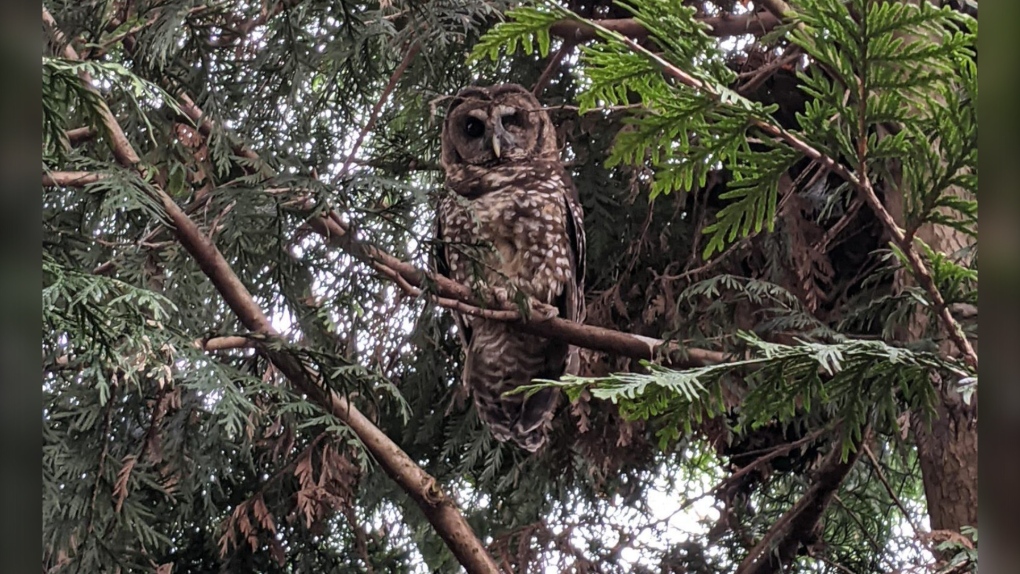 A northern spotted owl found injured near San Francisco has arrived at a British Columbia breeding facility where the adult male is expected to find a mate and potentially contribute to a strengthened gene pool for the threatened species. (Northern Spotted Owl Breeding Program/Facebook)

VICTORIA -- A northern spotted owl found injured near San Francisco has arrived at a British Columbia breeding facility where the adult male is expected to find a mate and potentially contribute to a strengthened gene pool for the threatened species.

It took months of logistical work to bring the owl nicknamed Cali to the Northern Spotted Owl Breeding Program in Langley after rehab stints in California and Oregon, says Jasmine McCulligh, a spotted owl specialist and breeding program co-ordinator.

“We've been anxiously awaiting him for literally a year,” she said in an interview. “He's just going to be so important to the breeding program. It gives his life some purpose. Instead of just sitting in a aviary, he's going to contribute to the future of his species.”

Four-year-old Cali brings the potential to help produce stronger offspring if he finds a mate among the female spotted owls at the Langley facility, McCulligh said.

There have been reports of wild northern spotted owls from Washington state being observed in B.C., but never spotted owls from California, which means Cali will bring new genes to the province, McCulligh said.

California marks the southern range for northern spotted owls. Old-growth forests near Lillooet in B.C.'s Interior are the northern reach for the owls, she said.

“In theory, based on biology and biological theories, his genetics paired with a genetically distinct individual, their offspring will be very fit and good to breed with other owls,” said McCulligh.

She said the owl was found injured in a forest near San Francisco and as a result of the injury ended up losing his left eye.

The loss of the eye does not impede his ability to find a mate and produce offspring, McCulligh said.

“He's as heathy as a horse,” she said. “He's just got a little bit of a vision problem. He's able to fly and feed himself just fine and his genetics aren't going to be affected by the lack of an eye.”

The government and Spuzzum First Nation, located about 150 kilometres east of Vancouver, said they will work on a spotted owl recovery program.

The B.C. government has said previously there were at one time up to 1,000 spotted owls in provincial forests, but habitat loss and competition from the barred owl reduced their wild population to less than a dozen.

Protection of spotted owls has fuelled decades-long disputes between environmental groups and the forest industry as their future is often tied to saving old-growth forests where they live.

McCulligh said there are now 29 spotted owls, including Cali, at the B.C. breeding program facility, but none of the owls are ready to be released into the wild.

She said the facility is awaiting the arrival of this year's spotted owl eggs in the coming days after only two successful births last spring.

Cali's arrival earlier this month was too late for this year's mating season, but he should be ready next year, said McCulligh.

It's also taken the California owl a bit of time to adjust to his new home, she said.

This report by The Canadian Press was first published March 21, 2021.