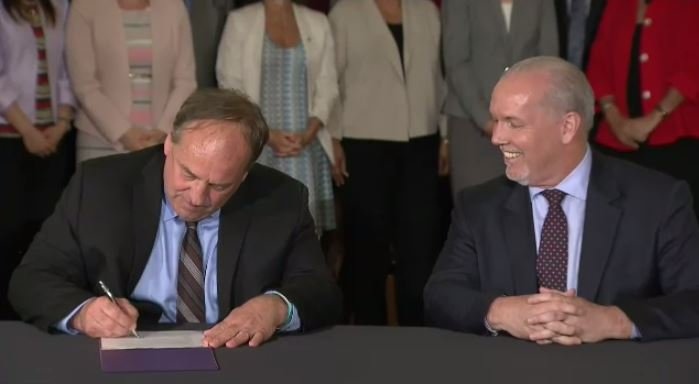 Green Leader Andrew Weaver and NDP Leader John Horgan sign an agreement that would see the NDP form a minority government with the support of the Green party. May 30, 2017. (CTV Vancouver Island)

VICTORIA - The recently signed New Democrat and Green party manifesto to form what is likely to result in British Columbia's first minority government in sixty-five years has become required reading for business, social and labour groups.

The leaders of B.C.'s business council and federation of labour said they have been reviewing the 10-page document signed last week by NDP Leader John Horgan and Green Leader Andrew Weaver in preparation for what could be momentous political change.

Prof. Michael Prince, a social policy expert at the University of Victoria, said Tuesday that social services organizations are examining the document, paying particular attention to plans to establish a provincial poverty reduction strategy and conduct a test project on providing basic incomes to fight poverty.

“Different groups are poring over the agreement for what it may say and what it may not say,” he said. “This is much fuller than we've seen in recent throne speeches.”

Greg D'Avignon, of the B.C. Business Council, said he supports plans to form an emerging economy task force and establish an innovation commission for business development in the technology sector, but he's wary of proposed increases to the carbon tax.

B.C. businesses pay millions a year in carbon taxes while trade partners, competitors and possible customers in Canada and other jurisdictions are not paying a similar tax, and talk of raising the tax is causing concern, he said.

The NDP-Green agreement plans to increase the carbon tax on carbon emissions by $5-per-tonne each year, starting next April. B.C.'s carbon tax is currently at $30-per-tonne.

The federal government said it will impose a carbon tax plan at a minimum of $50 a tonne by 2022.

D'Avignon said business groups are already far ahead of governments, including the proposed NDP-Green alliance, when it comes to embracing the emerging economy and supporting innovation in the technology sector.

“They are thinking about it, which is great,” he said. “We've been having this innovation conversation here for five years, at least.”

Irene Lanzinger, of the B.C. Federation of Labour, said the commitment to increase the minimum wage to $15-an-hour validates more than two years of lobby efforts by her organization.

The political agreement calls for the formation of a Fair Wages Commission to bring in the $15 minimum wage. The document did not include a timeline for implementing the increase.

Lanzinger said the federation wants to see a set times for the introducing of the higher wage that will keep pace with planned increases in other provinces.

The combined seats of 41 New Democrats and three Greens gives the two parties a one-seat majority over the Liberals in B.C.'s 87-seat legislature.

Read the full agreement below.