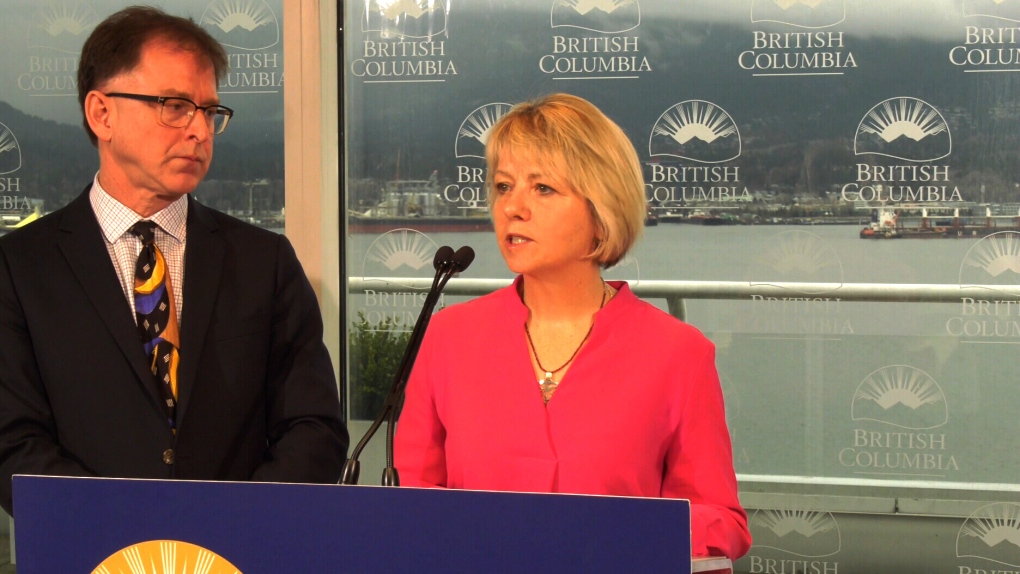 VANCOUVER -- British Columbia declared an outbreak of the novel coronavirus at a North Vancouver long-term care home on Saturday, saying two elderly residents were recently diagnosed with the virus along with four others in the province.

The care home is now following an outbreak protocol that restricts visitors and imposes “infection control precautions” on all staff interactions at the facility.

“We know that the elderly in our communities are at high risk of having severe disease or complications from COVID-19,” Henry said, her voice wavering. “...I'm calling on all of us in B.C. to do what we need to do to protect our seniors and elders in our community and to keep them safe.”

Henry at one point became choked up, pausing mid-sentence as tears streaked her cheeks.

“The last two cases really are the most concerning to us,” she told reporters in Vancouver.

At least 57 people in Canada have the novel coronavirus, with 27 confirmed cases in B.C., 28 in Ontario - two of which were announced in the last day - and two in Quebec. There are another two presumptive cases in Alberta that have yet to be confirmed by the National Microbiology Lab in Winnipeg.

Henry urged people who feel sick to stay away from work, school and large gatherings, suggesting virtual meetings instead.

“We are in an extraordinary situation. If you or your children are sick, stay home, isolate yourself.”

She categorized the two cases at the care home as community transmission, distinct from imported cases when a traveller contracts the illness abroad before returning home.

B.C. said Friday it activated a pandemics co-ordination plan to respond to the COVID-19 outbreak and is prepared to escalate their response if needed.

Four of the 27 British Columbians who have tested positive have recovered and three are now in hospital, with one woman in her 80s in an intensive care unit, Henry said.

Meanwhile, a growing list of events are being cancelled around the world in anticipation of fewer people travelling to and from infected areas.

The women's world hockey championship was slated to begin later this month in Halifax and Truro, N.S., but the tournament was cancelled on Saturday to protect the health of players and fans.

Rene Fasel, president of the International Ice Hockey Federation, said teams from eight countries were expected to take part, but travel arrangements were getting complicated.

“It's scary,” Fasel said, adding that the status of other upcoming international hockey tournaments will be determined next month. The men's world championships are set to open May 8 in Switzerland.

“For sure, we are concerned and we are monitoring this.”

The 2020 Arctic Winter Games in Whitehorse were similarly cancelled.

Canadians planning to travel abroad are also getting hit with demoralizing cancellations.

Graham Ereaux, a singer-songwriter with the Nova Scotia-based indie folk band Devarrow, said he was stunned when he learned Friday that the South by Southwest Conference and Festival in Austin, Texas, had been cancelled to prevent the spread of the virus.

“It's the biggest (musical festival) of its kind in the world,” said Ereaux. “It's an emerging artist festival... A main motive for us was to go and get an American booking agent.”

The Grand Princess, which is carrying more than 3,500 passengers and crew, is being held off the coast of San Francisco. U.S officials say they plan to bring the ship to a “non-commercial port.”

Canadian health officials continue to stress that the risk posed by the novel coronavirus in this country remains low.

Chief public health officer Dr. Theresa Tam has said most of the cases have been mild, and the patients are self-isolating at home.

About seven people are in hospital, but she said that doesn't necessarily mean they are severely ill.

Around the country, officials are prioritizing efforts to sanitize places where people gather in close quarters, such as planes, trains, subways and stadiums.

And on Saturday Tim Hortons got rid of the cups for its annual “Roll Up the Rim” contest, saying “the current public health environment” means “it's not the right time for team members...to collect rolled up tabs that have been in people's mouths.”

On the international front, the number of infected people worldwide exceeded 100,000 on Friday. The World Health Organization says most of the new cases had shifted from China to other countries.

The virus was first confirmed in China's Hubei province on Jan. 7. About 90 countries have since reported infections.

The World Health Organization has warned the virus could spread at a rapid rate in countries that don't have the capability to detect it.

This report by The Canadian Press was first published March 7, 2020.