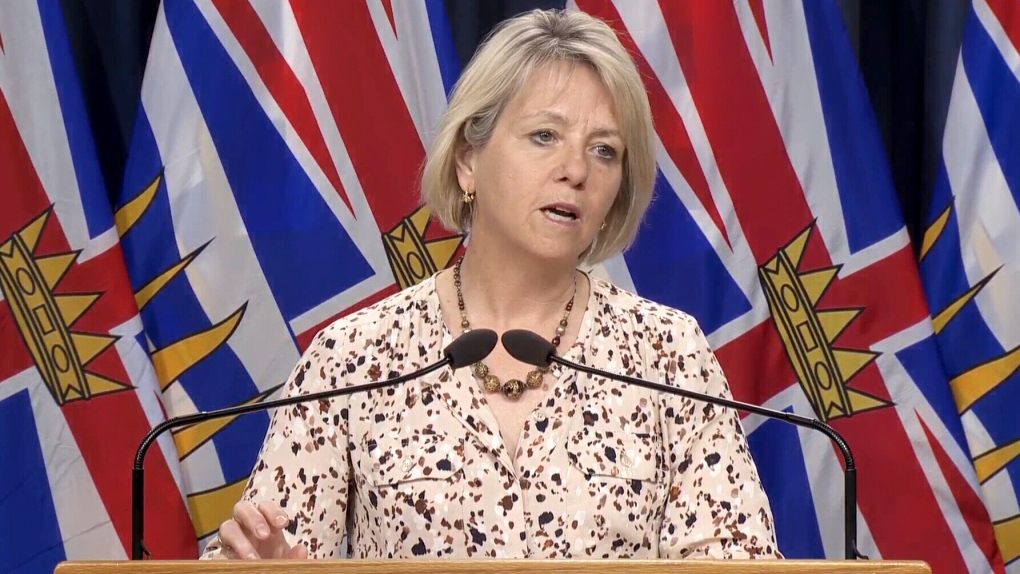 B.C. has recorded a total of 6,830 COVID-19 cases since the beginning of the pandemic. Of those cases, 1,412 are currently active, including 42 people who are in hospital for treatment, 14 of whom require critical care.

No new deaths related to the virus were announced Thursday, leaving the province's death toll at 213.

Provincial health officer Dr. Bonnie Henry said a recent rise in hospitalizations is “worrisome” but not yet urgent.

She says that the current demand on health-care resources, like hospital space and intensive care beds, remains low.

“We’re not at a point where we’re concerned about that,” she said.

A total of 5,190 people have recovered from COVID-19 since the pandemic began.

No new health-care outbreaks have appeared over the past 24 hours, though 16 remain active in the health-care system.

Thirteen outbreaks are located in long-term care or assisted-living facilities and three are active in acute care facilities.

No new community outbreaks have been detected since Wednesday, though community exposure events continue to be appear across the province.

“We encourage everyone to check regularly with their health authority website for alerts and guidance around community exposure events,” said Henry.

Henry said this was especially important as schools reopened Thursday.

“I know for many children and families that this can be exciting and anxious, no more so than this year,” she said.

“I remember what it was like for me and my sisters when we were young, but it’s also a time when we need to step back and set our new routines for our new school year and for the new phase we’re entering,” said Henry.

B.C.’s top doctor says it is critical that everyone be diligent in screening themselves before going to school, including students, teachers and other staff members.

Individual cases of COVID-19 at a school will likely not be discussed publicly with people who do not attend the school, though outbreaks that appear in school settings will be announced. Henry says that an “outbreak” would only be declared if multiple cases arise in a school.

The provincial health officer says she believes a school is more likely to temporarily close due to multiple teaches contracting COVID-19 rather than students, as this has been the case in other provinces where the school system has restarted.

Henry adds that a single case of the virus at a school may not require anyone else to stay at home, depending on if that individual may have exposed the virus to others.

“It would depend on the investigation,” she said.

B.C. Health Minister Adrian Dix added that it was important to keep social circles small and consistent amid the pandemic.

“Stick to six,” he said, explaining that social bubbles should be limited to just a single group of six people, and not multiple groups – even if they are made up of six people or fewer.

While COVID-19 cases have been surging over the past several weeks, Henry says that it is important that businesses and schools remain open as much as possible for “our social, mental and economic health.”

“More than ever we need to remind ourselves that we can do this,” she said.

Most of B.C.’s COVID-19 cases have been detected in the Lower Mainland, with 3,551 confirmed in the Fraser Health region and 2,343 recorded in the Vancouver Coastal Health region.

The Island Health region has confirmed 187 cases of COVID-19, an increase of two since Wednesday.

Eighty-four people who live outside of Canada have tested positive for the virus in B.C.