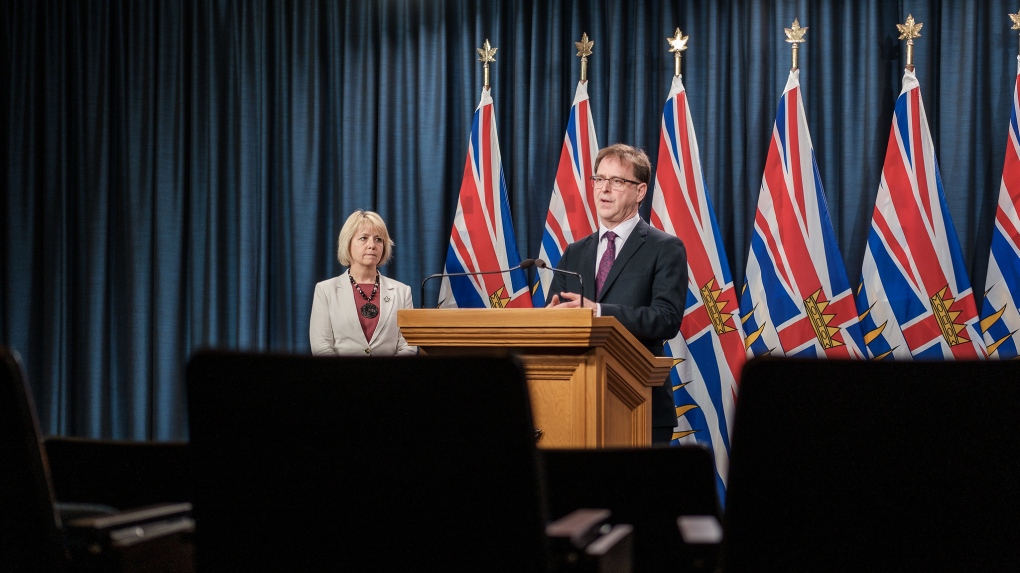 VANCOUVER -- Health officials have announced another 21 confirmed cases of COVID-19 in British Columbia, bringing the province's total to 3,170.

The total includes 18 new positive tests for the coronavirus and three epidemiologically linked cases, and it marks the seventh day in the last eight during which the total number of cases in B.C. has grown by at least 20.

There are 192 active cases of the virus in B.C., including 15 people who are in hospital, three of whom are in critical care.

Provincial health officer Dr. Bonnie Henry said there have been no additional deaths from COVID-19 in B.C. over the last 24 hours, leaving the province's death toll from the virus at 189.

Thursday's update from Henry and Health Minister Adrian Dix comes just hours after the pair released the results of serology testing in the province, which suggested that fewer than one per cent of B.C. residents have antibodies for the virus.

Henry dedicated a significant portion of her remarks on Thursday to reviewing those results, saying that they reflect the success B.C. has had in limiting the transmission of the virus in its jurisdiction.

"The report shows that we have been very effective at flattening our curve here in British Columbia," she said.

Researchers remain uncertain whether having antibodies for the virus means a person will be immune to it in the future, Henry stressed, adding that the low rate of transmission in B.C. means the vast majority of residents remain susceptible to COVID-19.

"The thing that we need to remember is that most of us do not have antibodies to this virus," the provincial health officer said. "We have not been infected. And we need to keep doing the things that we're doing to minimize the effects of this virus in our communities."

Henry also addressed the record number of drug overdose deaths recorded in the province in the month of June, becoming emotional as she described the loss of 175 "of our brothers and sisters" to the province's toxic drug supply.

"This ongoing crisis reminds us that we need to put as much time and effort and kindness and compassion into caring for people who use drugs as we have been successful in doing in responding to the COVID-19 crisis," Henry said.

June is the third month in a row in which B.C. has seen a record number of overdoses, and Henry reiterated her calls for the provision of a safe drug supply and the decriminalization of small amounts of drugs for personal use.

"We know that safer supply - hydromorphone, diacetylmorphine - is not what is killing people in our streets right now and in their homes right now," she said. "It is the toxic street drug supply."

There have been no new outbreaks of COVID-19 in health-care facilities or in the broader community, Henry said Thursday.

Health officials continue to monitor two outbreaks at long-term care facilities and one at a hospital acute care unit. They are also monitoring the community outbreak at Krazy Cherry Farm in the province's Interior, which now has a total of four cases associated with it, according to Henry.

The provincial health officer said there have now been 27 cases confirmed associated with a pair of private parties that happened in Kelowna on Canada Day. Eighteen of those people reside in the Interior Health region, while the remaining nine reside in the Lower Mainland.

Henry reminded those who attended the parties to monitor themselves closely, avoid close contacts with others, and to call 811 if they have "any symptoms at all" to arrange for COVID-19 testing.

Most of B.C.'s confirmed cases of COVID-19 have been located in the Lower Mainland, with 1,667 located in the Fraser Health region and 1,028 in Vancouver Coastal Health.

Elsewhere in B.C., there have been 223 cases of COVID-19 in Interior Health, 136 in Island Health and 65 in Northern Health. Another 51 confirmed cases in the province have happened among people who reside outside Canada.

A total of 2,789 people who previously tested positive for the coronavirus in B.C. have now fully recovered.

These totals reflect confirmed cases, but Henry noted Thursday that serology testing suggests roughly eight times as many people in some parts of the province have actually had the virus. The provincial health officer specifically said more than 16,000 people in the province have likely been infected.

Why a closed border hasn't kept international flights out of Canada

This is how teachers across Canada feel about reopening schools

Police notified of 21,422 cases where travellers to Canada may have broken quarantine rules

Profile of a killer: Unravelling the deadly new coronavirus

Don't use fake exemption cards to get out of wearing a mask, feds warn Canadians