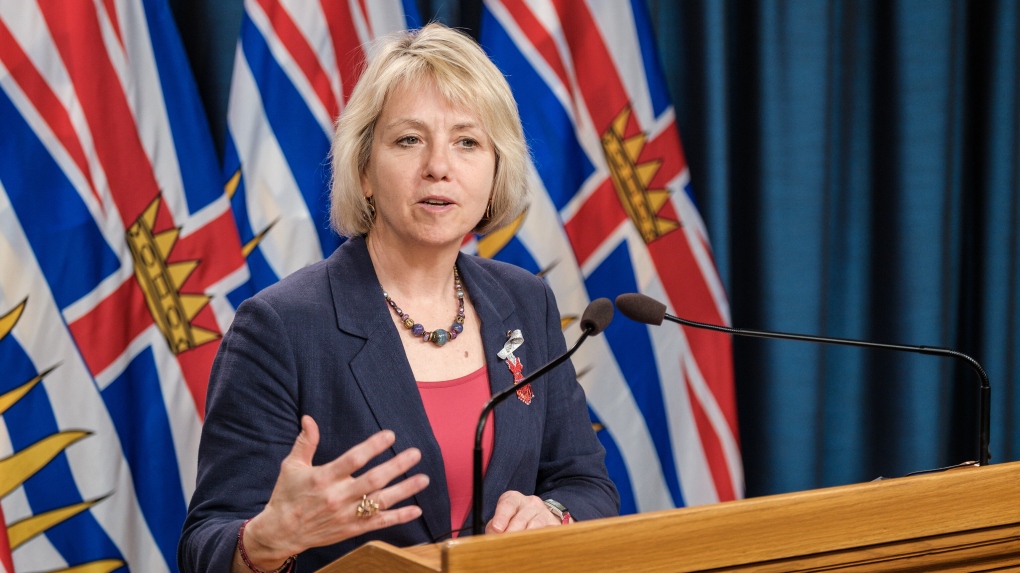 VANCOUVER -- Health officials in British Columbia announced 68 additional cases of COVID-19 in the province Thursday, as well as one additional death.

The update from Health Minister Adrian Dix and provincial health officer Dr. Bonnie Henry brought the total number of coronavirus cases identified in B.C. since the pandemic began to 5,372. There have been 204 deaths from the virus in that time.

Henry said there are currently 906 active cases of COVID-19 in B.C., including 22 people who are in hospital with the virus, seven of whom are in intensive care.

A total of 4,253 people who previously tested positive for the coronavirus in B.C. have now recovered.

Thursday's update also included the announcement of a new community outbreak at a construction site in the Interior Health region. Seven workers at the water treatment facility near Elkford, B.C., have tested positive, Henry said.

The outbreak was detected after the workers had returned to their homes, which has presented a logistical challenge, Henry said.

"We have contacts of the people who were affected at the facility in B.C., Alberta, Saskatchewan and Ontario, so a coordination meeting was held this morning and we'll continue to coordinate across the country managing this small outbreak," she said.

The provincial health officer said there's no risk to people in Elkford or elsewhere in Interior Health, as the workers resided separately from the general community. All of the close contacts of people who tested positive at the site have been reached, Henry said.

There have been no new outbreaks in health-care facilities in the last 24 hours, and Dix said the outbreak at Arbutus Care Centre in Vancouver had been declared over, leaving B.C. with 11 such outbreaks - nine in long-term care homes and two in acute care facilities.

Thursday's update also included information on "suspect cases" of what health officials are calling MISC - multisystem inflammatory syndrome in children - an illness similar to Kawasaki syndrome that has been linked to COVID-19 exposure in children.

Henry said there have been eight cases of suspected MISC in B.C., but none have been confirmed, because the criteria for confirming MISC includes known exposure to or a positive test for COVID-19.

"All eight cases are suspect because they did not test positive for COVID-19 virus, they didn't have antibodies, either, and they had no known exposures to COVID-19 cases," Henry said.

All eight children who are suspected of having MISC in B.C. were admitted to hospital and two spent time in intensive care, the provincial health officer said. All eight have since fully recovered, she added.

"These are serious illnesses, as we know, but this is a reflection of the fact that our system works," Henry said. "We have been monitoring it across B.C. and we will continue to monitor it, particularly as we move in to the coming months with things like school opening."

In addition to the overall update for the province, Henry presented updated regional data showing how many cases of COVID-19 were recorded in specific cities and regions of B.C. through July 31.

The updated map is colour-coded by the number of cases per 100,000 population and shows cases by where the person who tested positive for the virus resides, not necessarily where they contracted the virus.

"The map tells us things that we know: that virtually every part of our province has been touched by COVID-19, communities large and small and geographically dispersed," Henry said.

Many of the places with the highest proportion of cases per 100,000 people are located in the Lower Mainland, where the vast majority of confirmed cases in the province have been found.

Among the areas with more than 100 cases per 100,000 people in the Lower Mainland were Surrey, North Vancouver, Mission, Abbotsford, downtown Vancouver and south Vancouver.

Elsewhere in the province, some relatively sparsely populated areas have also recorded more than 100 cases per 100,000 in population. Haida Gwaii, for example, recorded 20 cases of COVID-19 between January and July 31, according to the data. That was enough to earn the remote archipelago the darkest shading for per-capita cases on the map.

Similarly, 30 cases in northern Vancouver Island equate to more than 100 cases per 100,000 residents, according to the data. 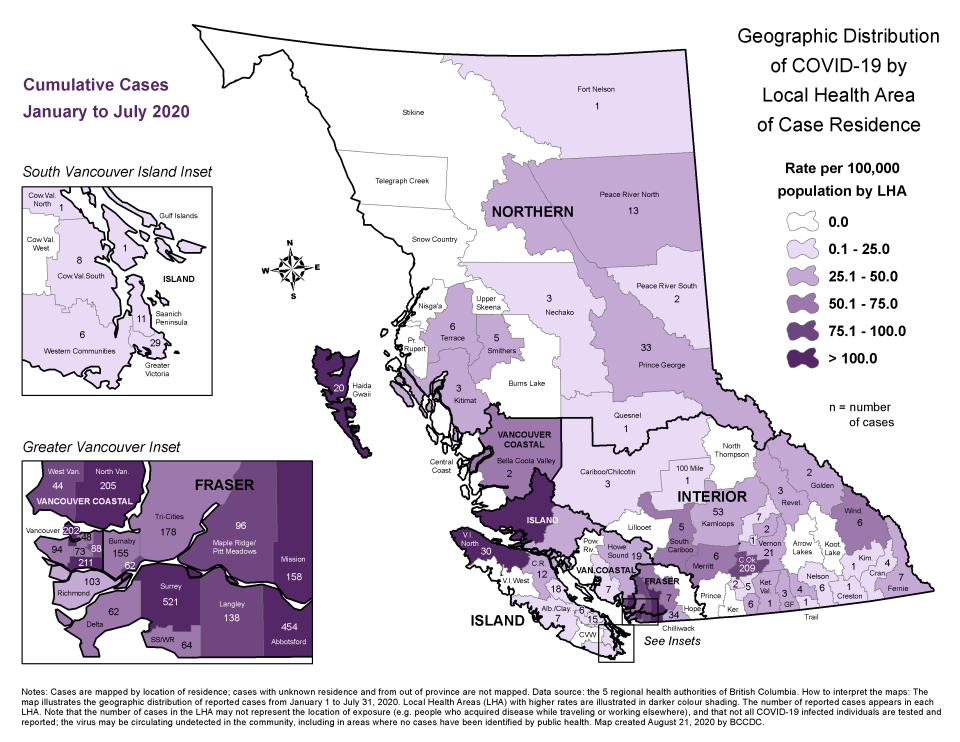 Since the pandemic began, there have been 2,818 cases of COVID-19 confirmed in the Fraser Health region and 1,737 in the Vancouver Coastal Health region.

Elsewhere in B.C., there have been 429 cases confirmed in Interior Health, 173 in Island Health and 137 in Northern Health.

There have also been 78 people who tested positive for COVID-19 in B.C. but reside outside Canada.

Back-to-school shopping amid COVID-19: What you need for September

Here's how some B.C. schools will operate under COVID-19 safety protocols

Women may have better immune response to COVID-19 than men, study finds

France adds more than 5,000 new coronavirus cases in one day

Coronavirus: This is what frosh week may look like for students this year

COVID-19 lockdowns blocked flu in some places but fall looms

More needs to be done to convince reluctant Canadians to get COVID-19 vaccine, Dr. Tam says

Dr. Abdu Sharkawy: Why not all of my kids are going back to school