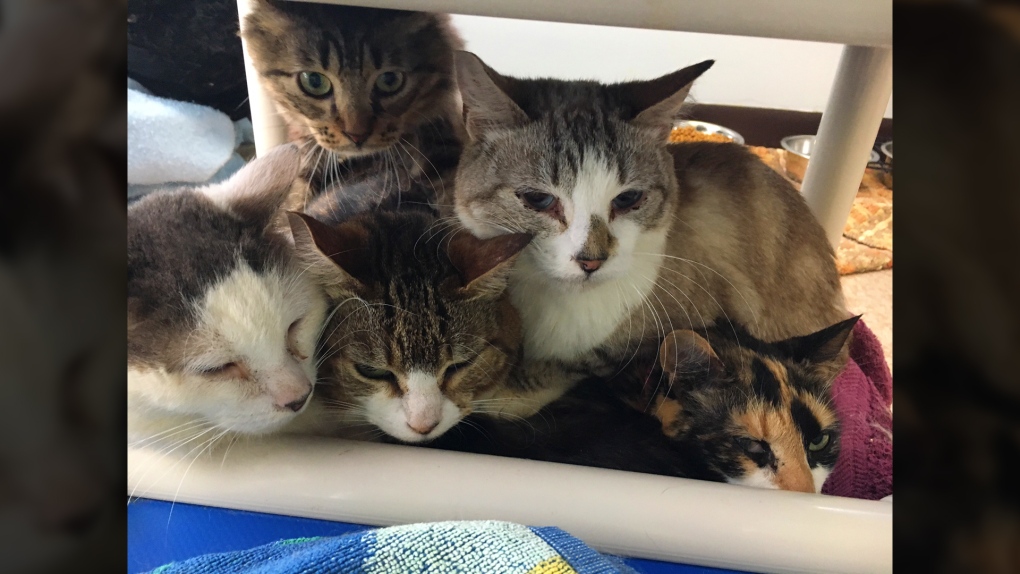 Officials say the cats were found in overcrowded and unsanitary living conditions at a home in Greater Victoria, with many suffering from untreated conditions. Sept. 5, 2017. (Courtesy BC SPCA - Victoria Branch)

The Victoria SPCA is dealing with one of the largest cases of animal hoarding the branch has ever seen after 56 cats in rough shape were surrendered last week.

Officials say the cats were found in overcrowded and unsanitary living conditions at a home in Greater Victoria, with many suffering from untreated conditions.

“It’s been pretty tough. I started with 10 and then we ended up with 30, and then we had over 50 cats coming in,” said Victoria SPCA Manager Annie Prittie Bell. “It’s not something that I’ve dealt with in here before on this kind of scale, and we’re looking at some pretty tough conditions.”

So many animals were taken in over a three-day period that 25 cats already in the care of the Victoria SPCA had to be moved to other Vancouver Island branches.

Many of the animals were found matted in urine or feces and have upper respiratory problems, eye infections and dental diseases, among other issues.

Prittie Bell said it was particularly jarring to watch one of the clearly dehydrated cats lap up water for three minutes straight.

Investigators say the couple who surrendered the dozens of cats cooperated with the SPCA.

“It was a humane officer surrender as a result of our investigations,” said Prittie Bell. “We’re really grateful that they were surrendered because then we can do everything we need to do right away, but just an awful situation overall.”

The SPCA’s top priority is now assessing and treating each animal, and once they’re healthy enough they’ll be put up for adoption. The branch has also closed all adoptions so that staff and volunteers can fully focus on caring for the 56 cats.

The branch is also asking for supplies to help care for the animals in the meantime, such as towels and sheets, and is expecting massive costs associated with dental work and treatment.

“It’s going to be huge costs. I’m assuming tens of thousands of dollars that we weren’t anticipating at all for the rest of this year, so we’re going to need to fundraise for these guys,” said Prittie Bell.

Anyone wanting to make a donation to the Victoria SPCA can do so online or in person at 3150 Napier Lane in Victoria.

Investigators say no charges are being recommended against the cats’ owners because they willingly surrendered the animals.