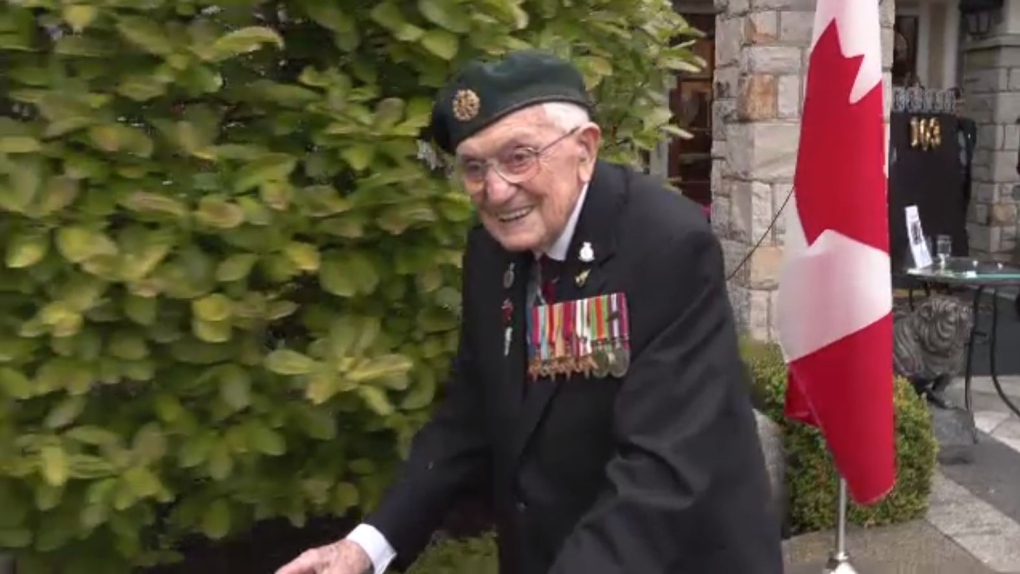 103-year-old John Hillman is pictured at the start of his fundraiser for Ukrainian children. May 2, 2022 (CTV News)

John Hillman, who captured hearts all over the world at the start of the pandemic by raising money for COVID-19 relief, is now a Canadian citizen.

Hillman took the citizenship oath in an online ceremony Thursday after moving to Oak Bay 25 years ago. He say he wanted to become a citizen to show his appreciation for all that Canada has done for him.

"Honoured," said Hillman on a bench outside of his home at Carleton House, an independent seniors residence. "I feel honoured having done it."

Over the last three years Hillman has raised more close to $300,000 by walking laps of the home’s front courtyard. The money has gone towards COVID-19 relief, Save the Children and Ukrainian relief efforts.

A veteran of the Second World War and originally from Wales, Hillman says he has had a long affiliation with Canada.

"My best man at my wedding 79 years ago was a Canadian Air Force boy," Hillman told CTV News.

That "Canadian Air Force boy" also became his brother-in-law, marrying Hillman’s wife's sister. The couples would visit each other over the years.

Hillman said his daughter moved to Canada about 50 years ago as well, giving him another tie to the country.

The real motivation though for Hillman was the acceptance he felt here.

"Canada was so good to me. They’ve been better to me than my own country," said Hillman.

The new Canadian said he’s not sure why the media gives him so much attention.

"I’m not a hero," Hillman humbly said. "I’m getting a lot of attention which I don’t really think I deserve."

Hillman planned to celebrate with a dinner with all his Canadian family members Friday.