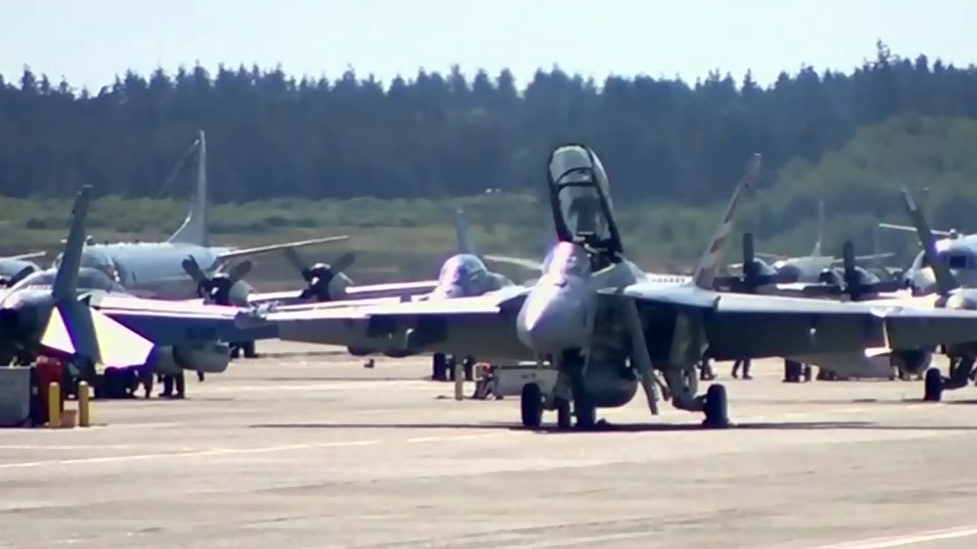 The U.S. Navy's EA-18G Growler jets at Naval Air Station Whidbey Island have been a longstanding annoyance for nearby residents, including on Vancouver Island. (File photo)

When Marge Plecki and her husband built their retirement home on an island north of Seattle in 2002, they were aware the Navy conducted training flights at a small airstrip nearby.

The noise was bearable, though, and she planned around them by running errands or doing other chores while the jets roared. That changed dramatically in March, when the number of EA-18G Growlers in the skies vastly increased.

The noise has sent Plecki and more than three dozen other residents of Whidbey Island's Admiral's Cove neighbourhood to court, filing a lawsuit filed last week, seeking compensation for what they say is their inability to use their property. The neighbourhood is a small enclave less than 1.6 kilometres from the end of the landing strip, just beneath the final approach and takeoff path for the jets.

“I grew up in Chicago, in O'Hare's flight path,” Plecki said. “It's nothing like that. It's impossible to live. Your body shakes. You can't be outside. You can't jog. You can't do what normal people do outside their homes.”

She said that four days a week - for hours on weekday afternoons, evenings or even late at night, the jets scream relentlessly just 60 to 75 metres overhead as they practise “touch-and-go” landings akin to those used on aircraft carriers.

She and her neighbours can't hold conversations at their kitchen tables, the lawsuit says. Even indoors they wear earplugs inside of noise-cancelling headphones and they still can't sleep. Cracks from the noise vibrations have appeared in the walls and window seals, the lawsuit claims.

One of the plaintiffs, Vietnam veteran Paul Firnstahl, said in the lawsuit the noise has worsened his PTSD symptoms.

“Mr. Firnstahl is a Vietnam Veteran and a proud supporter of the military,” the complaint said. “However, he cannot support this flight increase, which he believes has destroyed his neighbourhood and is threatening community health.”

The lawsuit, which was filed in the U.S Court of Federal Claims, seeks compensation for the loss of the use of the residents' property. It's the second recent case challenging the Navy's operations; the state of Washington sued in July, saying the Navy failed to adequately consider the effect the expanded flight operations would have on people or wildlife.

The Navy's public affairs office cited a policy of not commenting on litigation.

The Navy in March authorized the expansion of its Growler program by up to three dozen jets, adding to the 82 already based on Whidbey Island, a 55-mile (89-kilometre) long island north of Seattle. The island is a mix of forests, farmland and beachfront communities popular for fishing, crabbing and clamming, but it is also home to Naval Air Station Whidbey Island, and the military is a major employer on the island.

The Growlers, which conduct electronic warfare to jam enemy communications and launch systems, are louder than the earlier ones the Navy used, including the EA-6B Prowler, the lawsuit said.

When it approved the expansion plan, the Navy said the number of flights would be comparable to those that occurred from the 1970s through the 1990s. It also said it would continue to invest in technologies to reduce engine and aircraft noise.

The small airstrip's geographic features approximate what it's like to land on an aircraft carrier, making it an asset for training, the Navy has said. The strip was built during World War II and has been used for emergency and practise landings to varying degrees since then.

In the 1990s, the Navy negotiated with the city of Coupeville and agreed not to conduct training flights after 10:30 p.m., not to fly touch-and-go missions more than two days in a row, and not to fly on weekends, according to the lawsuit. That changed in March.

Steve Morrissey, an attorney for the plaintiffs, said that if the operations continue, the Navy should buy out the properties of residents that could be most vulnerable to a crash, and pay damages to residents who have lost the use of their property because of the noise.