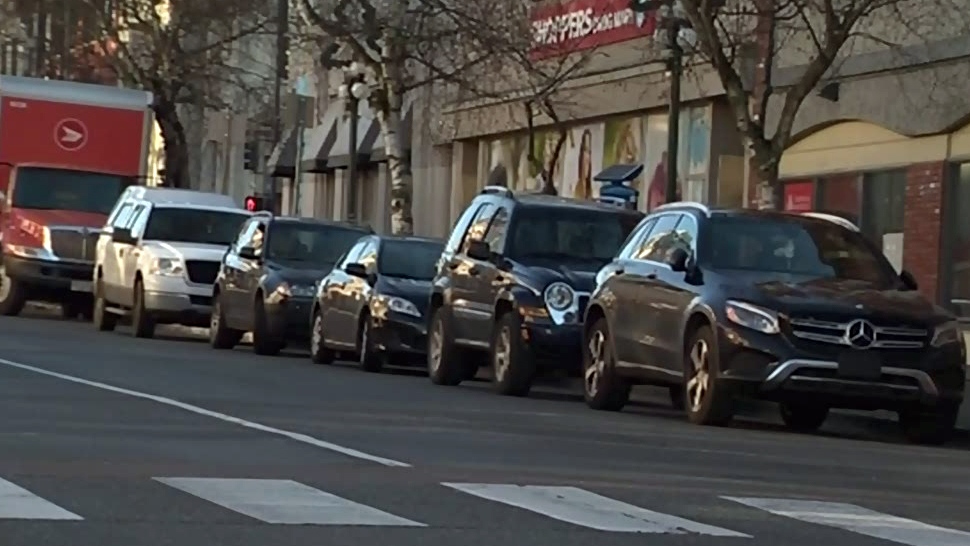 During a special committee of the whole meeting on Feb. 11, Victoria council voted in support of a motion by Mayor Lisa Helps to begin charging for on-street parking on Sundays beginning May 1. (CTV Vancouver Island)

Victoria city council has voted unanimously to scrap one of the capital city’s greatest parking perks.

During a special committee of the whole meeting on Feb. 11, Victoria council voted in support of a motion by Mayor Lisa Helps to begin charging for on-street parking on Sundays beginning May 1.

The motion not only directs staff to begin charging for parking on Sundays at regular rates but to also use the revenue from Sunday street parking to fund bus passes for Victoria youth.

Council’s goal is to supply the bus passes to youth for September 2019.

In discussing the move, Lisa Helps indicated to council that she plans to ask the transit commission to provide free transit to all youth in the region.

She also pointed to Kingston, Ontario where a similar program is in place. Helps says the plan has led to an increase in youth ridership in that city.

In December 2018, council voted unanimously to direct staff to explore the idea of charging for on-street parking on Sundays.

Staff indicated to council that eliminating the free Sunday on-street parking has generated “high interest in the community” in the past, “therefore, council may want to consider an engagement strategy before a final decision is made.”

Although staff don’t have detailed on-street statistics for Sunday parking, previous studies have indicated that a large number of cars park on-street for over four hours.

Downtown businesses have spoken out in favour of the plan, noting the majority of spots on Sunday are often taken by people who work downtown, or have left their vehicle overnight. The downtown business association was also leaning in favour, expecting the move could increase turnover in prime street spaces.

Currently on-street parking is free in the evenings Monday to Saturday from 6 p.m. – 9 a.m. and free all day Sundays and holidays.

On-street parking generates approximately $7-million in revenue annually with $1-million of that being generated on Saturday.

Based on city staff estimates, which take into account the number of businesses that are open on Sunday, and the reduction of cars parking do to the rate increase, staff believe charging for on-street parking will generate $600,000 in revenue a year.

It’s still unclear exactly how much the bus passes will cost the city.

Based on the mayor’s rough estimates funding youth transit would cost roughly a million dollars a year. Using census data the mayor believes there are around 6,300 youth in Victoria.

In discussing the plan, Councillor Ben Isitt asked the mayor what the plan would be to fund the $400,000 shortfall based on the mayor’s estimates.

The mayor indicated she has already begun discussions with BC Transit and the school district and hopes that funding the bus passes will be a collaborative process. She also indicated that the city’s estimates for Sunday on-street parking revenue could be conservative.

The mayor also said the school district had suggested starting the bus pass program as a pilot project in 2019, perhaps through just one school.

Citing the climate crisis, Isitt said that was not acceptable and suggested BC Transit and the school district need to “step up” this year.

Parking would still be free in city parkades on Sunday and holidays.

According to city staff, currently the Yates Street parkade is full or near capacity on Sundays.

Staff indicated to council that is is anticipated the parkade will become busier.

The plan still needs to be finalized as part of the city’s budget approval on Feb. 28, although Mayor Helps suspects with the unanimous council support it received on Feb. 11 that it will be approved.