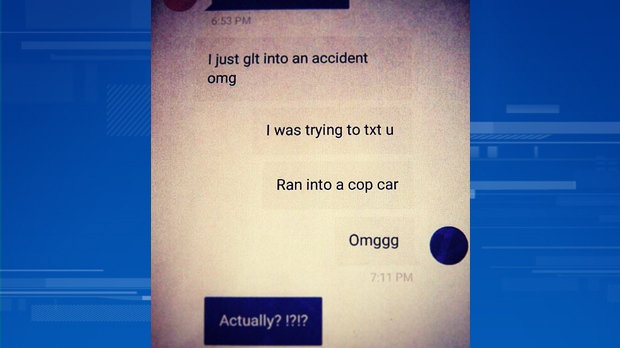 A screenshot of a text message shows the confession of a driver who rear ended a police car in Victoria. (Victoria Police)

Victoria police say a cellphone text message held the confession of a driver who rear ended a police car.

He says police recovered the phone of the suspect driver, and on it was a text message that said, “I just got into an accident, OMG. I was trying to txt u. Ran into a cop car. OMGGG.”

Rutherford says the officer and police dog were uninjured, but the female driver and a child were taken to hospital with non-life-threatening injuries.

The suspect's car suffered damage to its front end, and the driver was issued a $167 ticket for using an electronic device while driving.

Rutherford says the accident should remind motorists to leave their phones alone while driving, a message police will continue to hammer home in and around Victoria.