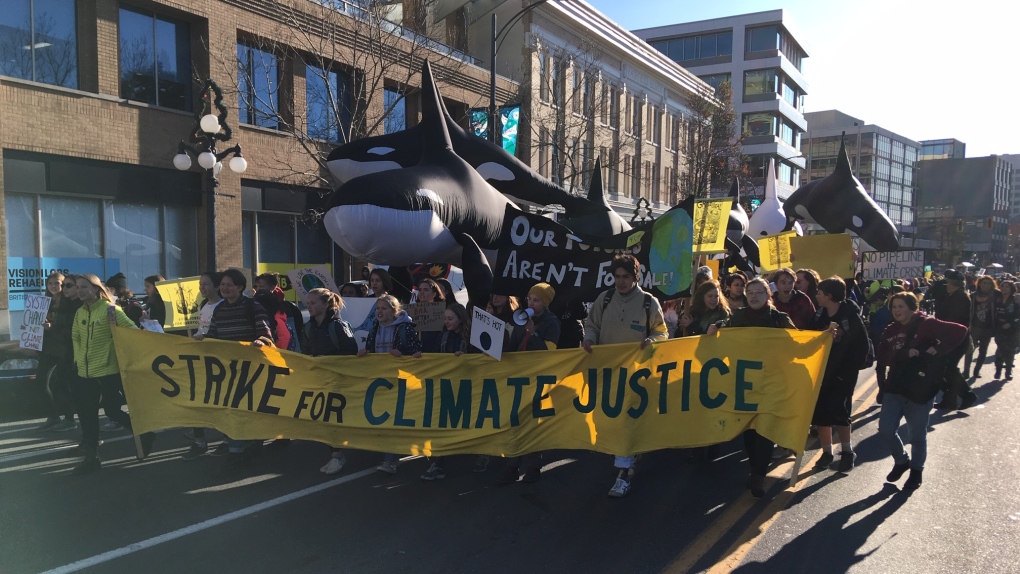 Traffic was diverted along Blanshard Street on Friday as Victoria students marched in a climate rally: Nov. 29, 2019 (CTV News)

The rally began in Centennial Square at approximately noon before youth activists marched southbound on Blanshard Street towards the office of B.C.'s Ministry of Energy, Mines & Petroleum Resources.

Student activists say they are calling on the government to begin a structured transition into greener sources of energy so that the province can become less dependent on coal and liquefied natural gas (LNG).

"So this specific strike we're targeting LNG and the Green New Deal and right now, the B.C. government is putting millions of dollars into LNG projects that will lock B.C into decades of GHG [greenhouse gas] emissions and we have to stop that," said Victoria student Grace Sinats.

"If we allow them to put this much money into projects that will destroy our planet, there is no hope," said Sinats.

Earlier this year, Premier Horgan announced that the province's $40-billion LNG project in B.C.'s northern coast would proceed. On Tuesday, the former executive director of the International Energy Agency, Maria van der Hoeven, said that B.C.'s Kitimat project was the only realistic middle ground between fossil fuel-based energy and other greener sources.

"There are now people that think they can have this energy transition in 10 years, well, be my guest," said van der Hoeven. "It's impossible."

"It's not only about energy transition, it's also about an economic transition and it's about a societal transition," said van der Hoeven. "You know, the biggest issue ... is there will be new winners and new losers. That means if people feel they are being left behind, they will be protesting because they are not going to accept this.”

Students at Victoria's youth protest said that while they are calling on the government to transition away from LNG, they were aware of the challenges that workers in the industry may face.

"Not only do we wish for LNG and fracking to have a smooth decline, but we need a just transition for all workers," said Victoria student Elliott Anderson. "If we just stop plain-out and there’s no training for workers to go to a new place, our economy will collapse and there's nothing we can do about it."

"We need a just transition so that workers can continue to sustain families and themselves," said Anderson.

Friday's youth climate protest comes on the heels of a year of massive climate protests across the globe. Sintas told CTV News that she believes repeated strikes are necessary to keep climate change on the forefront of people's minds.

"I feel like a lot of the time people can forget about the strikes pretty quickly," said Sintas. "Like it’s this big event and then not a lot happens."

"So, I feel like having regular strikes is really important to remind people that this is still an issue and it’s not going to be solved overnight."