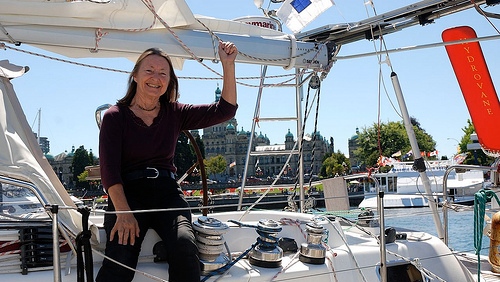 As she gets ready to push off from the dock and set sail on a new record attempt, Jeanne Socrates carries a quiet confidence, after all, she’s done this before.

In 2013, Socrates became the oldest woman to sail solo, nonstop, around the world.

Now, at 76 years old, she’s chasing a new title, oldest “person” to circle the world single-handedly, hoping to blast away the record set by a 71-year-old Japanese man.

She doesn’t think her age will slow her down, if anything, she expects to complete the journey faster than the 258-and-a-half days it took last time.

“I’ve set up the boat even better than previously. I’ve thought of a lot of things which I think have now been organized better,” said Socrates.

Of course, how long it takes, all depends on the weather.

If the wind doesn’t blow, she isn’t moving. The engine on her 38-foot boat has been sealed off, and when she ends her trip, it will be checked to verify she didn’t use it.

“Without the engine, if there is no wind, I’m just drifting around,” she said.

“I’m going around in circles because I have no wind, going backwards. I had to warn the cruise shifts going by that I was out there, drifting around,” explained Socrates.

Of course, too much wind, in the form of a storm, is no picnic either.

“In rough seas just doing ordinary things becomes a lot harder and takes a lot more time. So just going from one side of the cabin to the other can be quite difficult at times and making a cup of coffee or a cup of tea or something becomes quite a major event,”

Between chores, sailing, blogging, and keeping in touch with friends on the ham radio, there is no time to get lonely.

Besides, when she hits southern waters, she’ll have albatrosses keeping her company.

“I’ll go up on top and I’ll watch the birds, the albatrosses. Not many people get the chance to do that, so I feel privileged that I can.”

Albatrosses can glide on the wind for hours, thanks to wing spans that can reach more than three metres from tip to tip.

“They are hovering above the boat looking at you, you know, ‘What are you doing in my land?’”

Socrates said moments like that are what make the journey worthwhile, record setting or not.