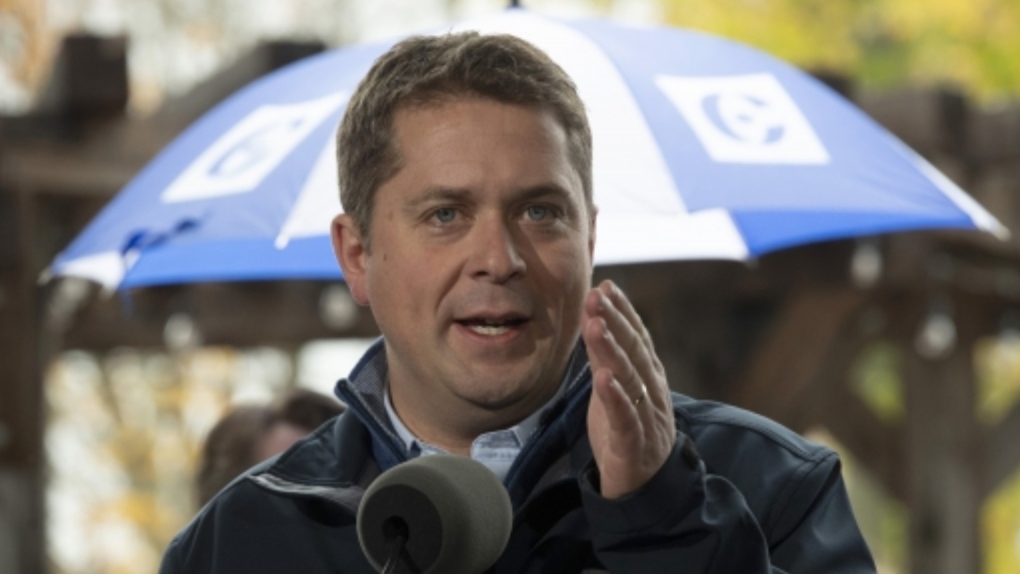 Conservative leader Andrew Scheer responds to a question as he makes a campaign stop in Fredericton, Friday, October 18, 2019. (The Canadian Press /Adrian Wyld)

The Liberal and NDP leaders said the Conservative leader is just making things up.

Scheer's claim came in Fredericton where he said - without citing specific evidence - that a potential coalition between the Liberals and the NDP might lead to a hike in the GST.

Most polls continue to suggest the Liberals and Conservatives are deadlocked, raising talk about potential minority or coalition governments. Support has grown for the NDP in some provinces and for the Bloc Quebecois in Quebec.

“It's not misinformation at all. We know that the Liberals are contemplating these types of things,” Scheer said.

“Justin Trudeau did a lot of things that wasn't in his platform after 2015,” he added, eliciting cheers from a group of supporters at a campaign event.

Scheer also defended past claims that the Liberals are contemplating new taxes on homeowners or would legalize hard drugs. The Liberals deny that too.

“Those claims are entirely untrue. It is unfortunate that the Conservatives keep having to make up attacks against us,” Trudeau said in the Toronto suburb of Whitby.

The Liberal leader reiterated his attack point that the Conservatives would have to cut $53 billion in services to pay for their pledge to balance the budget, a multi-year total that is drawn from the Conservatives' platform.

“There is a chance that there could be a Conservative government and that would mean cuts,” said Trudeau.

He said Canadians face a choice between Conservative cuts and the Liberal plan to fight climate change and make streets safer from gun violence.

“Mr. Scheer is just making stuff up because he's getting desperate. We absolutely will not raise the GST. No. Not whatsoever because it's not a progressive tax,” Singh said in Port Alberni, B.C.

“We've never, anywhere, in any of our announcements ever suggested any vague way that we would be increasing GST. That's wrong. That's not true.”

Singh said Scheer was showing he was desperate and Singh didn't think voters would believe him. But Singh also took aim at Trudeau, reiterating that he has been a disappointment to Canadians.

“Mr. Trudeau's going to tell you that you don't have a choice in this election, that you have to vote out of fear,” said Singh.

“In this election I want to be clear: I'm running to be your prime minister because I want to make a difference in the lives of Canadians.”

Singh was campaigning on Vancouver Island in a head-to-head fight with Green Leader Elizabeth May. The NDP has been dominant on the island, but the Greens have two seats and are looking for more.

Trudeau was pivoting to Ontario after two days in Quebec, turning his attention to ridings outside Toronto.

He has stops scheduled in the suburb of Vaughan, as well as Barrie and Orillia, smaller cities in Toronto's outer orbit.

Quebec and Ontario, as the country's two most vote-rich provinces, are key to victory in Monday's election.

Scheer is returning to Quebec, a province he just left, to campaign alongside the candidate hoping to knock People's Party Leader Maxime Bernier out of the House of Commons. He is to visit Beauce, outside Quebec City, with Conservative candidate Richard Lehoux before moving on to a rally in Drummondville.

Bernier, who just barely lost the Conservative leadership to Scheer before quitting and starting his own party, will make his first public appearance outside his home riding in days, at an afternoon news conference in Quebec City.

This report by the Canadian Press was first published Oct. 18, 2019.