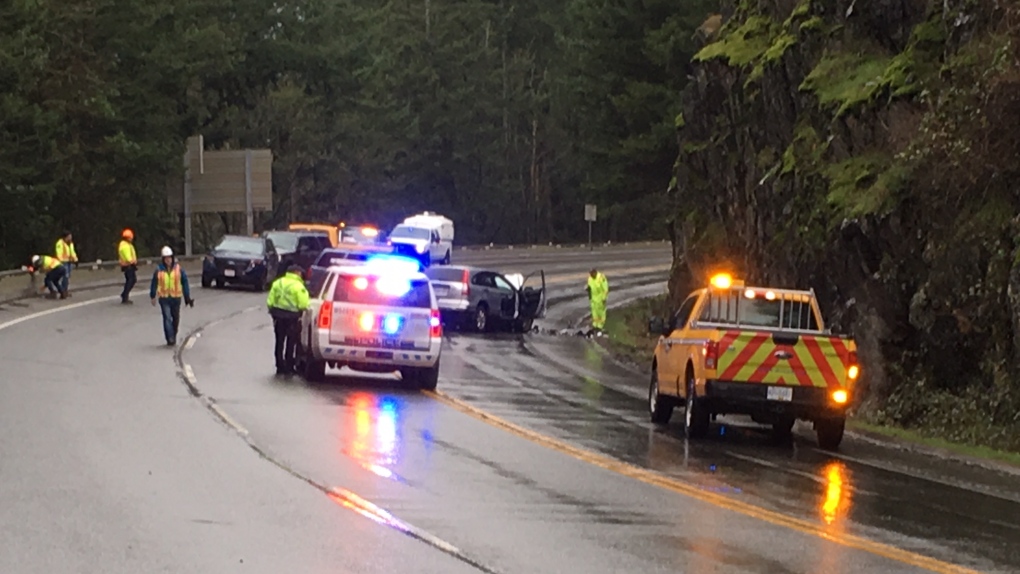 Lanes were closed on the Trans-Canada Highway near Langford after a two-vehicle crash Jan. 8, 2019. The government says new reporting protocols will allow crews to clear minor collisions faster.

Under the new rules, police will be free to clear collision scenes where there are no injuries and the damage does not exceed $10,000 before filing a written report. The law will apply to all vehicle types.

Under the previous law, officers had to complete a written report on any collision where damage exceeded $1,000 before any vehicles could be removed from the road. For motorcycles the threshold was $600 and for bicycles it was $100.

"Having traffic back up because of a minor collision where nobody was hurt doesn't help anyone — and worse, it can lead frustrated drivers to take steps that are unsafe," said Mike Farnworth, Minister of Public Safety and Solicitor General, in a news release Friday.

"Today's increase in the damage threshold for these kinds of crashes is long overdue and will allow people and police officers to move damaged vehicles out of the way without delay."

By increasing the reporting threshold to $10,000, the government says that provincial highways will be unblocked faster and more efficiently.

Police will continue to file a mandatory, written report with ICBC for every crash they attend that results in death or injury.

"Police officers will continue to attend collisions involving minor property damage at their discretion — for example, if questions arise about driver impairment or who's at fault," said B.C. Association of Police Chiefs chair Const. Neil Dubord.

"However, lifting the threshold for mandatory, written reports when officers do attend will help clear crash scenes much more quickly. In turn, it may lower risks for those working at the scene and motorists alike."