VICTORIA -- Protesters descended on provincial government ministries in downtown Victoria Friday morning in an effort to shut down the public service over opposition to a pipeline in northern B.C.

Lots of people driving by the protesters are showing their support by honking, otherwise things are very quiet.https://t.co/GrTxDKMcC3 pic.twitter.com/DygdO5JKwe

Staff at several ministries were advised to stay home or use alternate entrances and exits to the buildings.

Protesters sang and offered coffee and snacks to passersby.

The atmosphere was sharply different from the tense and chaotic scene that unfolded Tuesday as opponents of the Coastal GasLink pipeline surrounded the legislature, blocking all entrances and forcing the cancellation of ceremonial events linked to delivery of the government's throne speech.

No one appeared to be blocked from entering any government building Friday.

The protesters were acting in solidarity with those opposed to the Coastal GasLink pipeline project that crosses the traditional territory of the Wet'suwet'en First Nation near Houston, B.C.

Protesters have surrounded BC Government buildings in #YYJ this morning.

There were no reports of traffic impacts in Victoria. Victoria police said Friday's protests ended in the early afternoon.

Gloria Filax said she came to Victoria from Gabriola Island to support the Wet'suwet'en chiefs.

“I just think there's a critical mass of things happening and issues coming together,” she said outside the Ministry of Environment building. “It's about reconciliation and the disappointment in what our provincial and federal governments are not doing.”

Filax said the protests are necessary to show governments and business leaders the Wet'suwet'en do not support the Coastal GasLink pipeline, which is part of a $40-billion LNG Canada liquefied natural gas export terminal project slated for Kitimat, B.C.

“I don't really care if the trains are blocked,” she said. “I'm sorry it's inconveniencing people, but you know what, that seems to be the only way we can get attention from our government.”

Demonstrators outside #YYJ Courthouse. Tell me David Suzuki will be speaking tonight in support of their cause. @CTVNewsVI https://t.co/8LXjSMlRgS pic.twitter.com/lYMucSTSYz

Earlier this week, an email was sent out to all B.C. government employees alerting them to the pending protests and ensuring them the province will be "prepared for any eventuality." 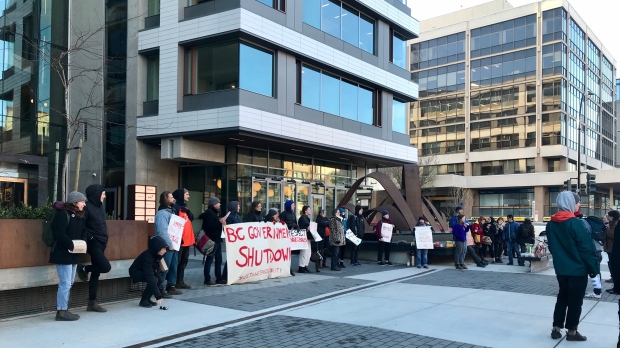 On Thursday, the Speaker of the legislature won a sweeping injunction preventing anyone from blocking doorways or driveways at the B.C. legislature.

The injunction restricts activists from obstructing, intimidating or interfering with legislative staff, security or government workers on the legislature grounds. Other government buildings are not included in the injunction, however.