One man in custody following standoff at Victoria apartment 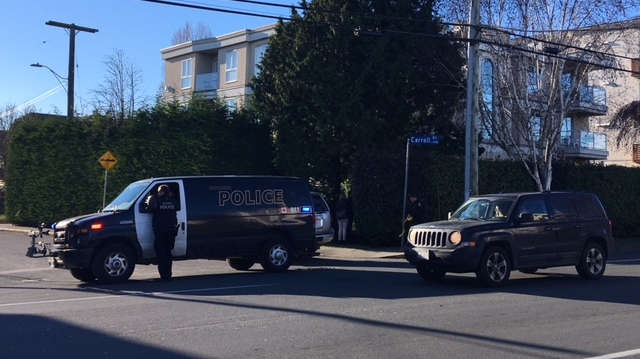 Police say a man has been taken into custody safely following a standoff at a Victoria apartment that started just after 9 a.m. and stretched into the late afternoon.

Victoria police and the Greater Victoria Emergency Response Team were called to the building at Burnside Road and Carroll Street at 9:15 a.m. Wednesday.

Officers were informed a man known to them was present at the building even though he was banned from visiting as part of his probation.

Negotiators were on scene and trying to get the man out of the building, police spokesman Const. Matt Rutherford said.

The 3100-block of Carroll Street was closed to traffic but Burnside remained open.

Police said they were using an abundance of caution in dealing with the man because he is known to them. A canine unit was also on scene.

At 4:22 p.m., police said the man was in custody an an investigation into the incident was ongoing.

UPDATE 3100-block of Carroll | Officers have taken the man into custody safely. This incident remains under investigation.