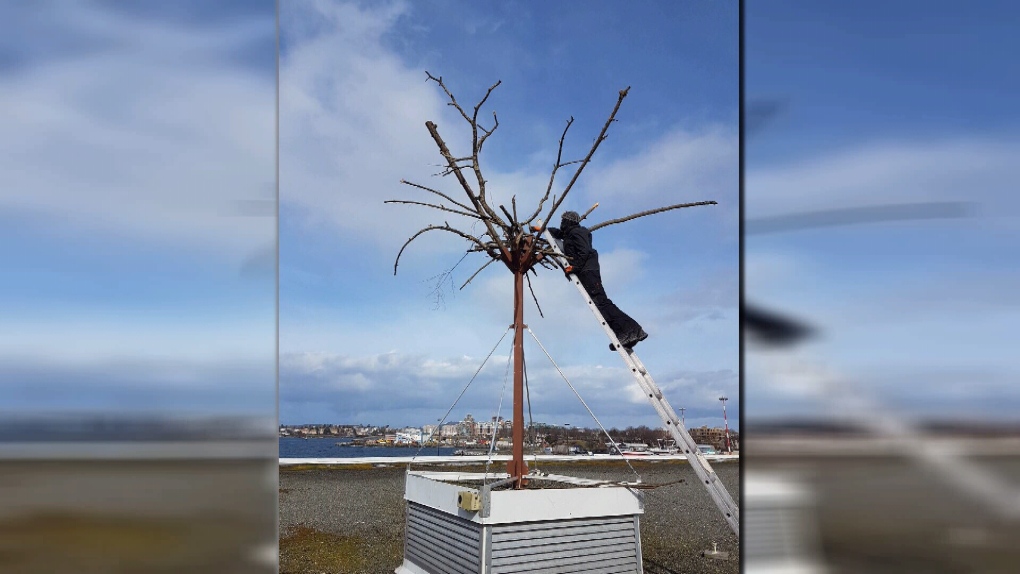 Victoria’s Ogden Point installing a fake tree or "snag" on the roof of one of its warehouses to attract eagles. March 27, 2018. (Greater Victoria Harbour Authority)

Victoria’s Ogden Point has installed a fake tree on the roof of one of its warehouses in an effort to keep it seagull-free.

The tree is part of a pilot project to get rid of a seagull problem that a pier at Ogden Point has been having for years. Feathers and dead gulls have been littering a warehouse roof, creating health hazards. Meanwhile, the acidity of seagull excrement has started to damage the roof.

It is hoped the tree-like structure will attract eagles looking to nest, as bald eagles are known to frequent the area. Ogden Point staff expect that by having the eagles stay permanently, they would scare the gulls away.

The tree has been up for two months now, but because it's late in the nesting season, eagles have yet to make use of it.

"We're waiting with bated breath and anticipation to see if they come and nest there," said John Briant, the general manager of Western Stevedoring, the company that operates Ogden Point. Staff partnered with Friends of Victoria Harbour Bird Sanctuary to come up with a solution to the seagull problem when the chairman of the sanctuary, Jacques Sirois, came up with the idea for a fake tree.

The structure is made of steel and wood, meant to mimic a "snag" which eagles typically build their nests on.

The project is also an effort to create a better habitat for the eagles. The eagles visiting Ogden Point often rest on tall light structures on the pier which can be unsafe and slippery for them.

As for whether or not the tree will actually work, Sirois and the staff at Western Stevedoring still aren't sure.

"We need to think outside the box a little bit," Sirois said. "This will not necessarily work immediately, but it may be part of a long-term solution."

Similar attempts to attract eagles have been made in Vancouver, where two dead trees were bolted down in False Creek in an effort to "rewild" the area.