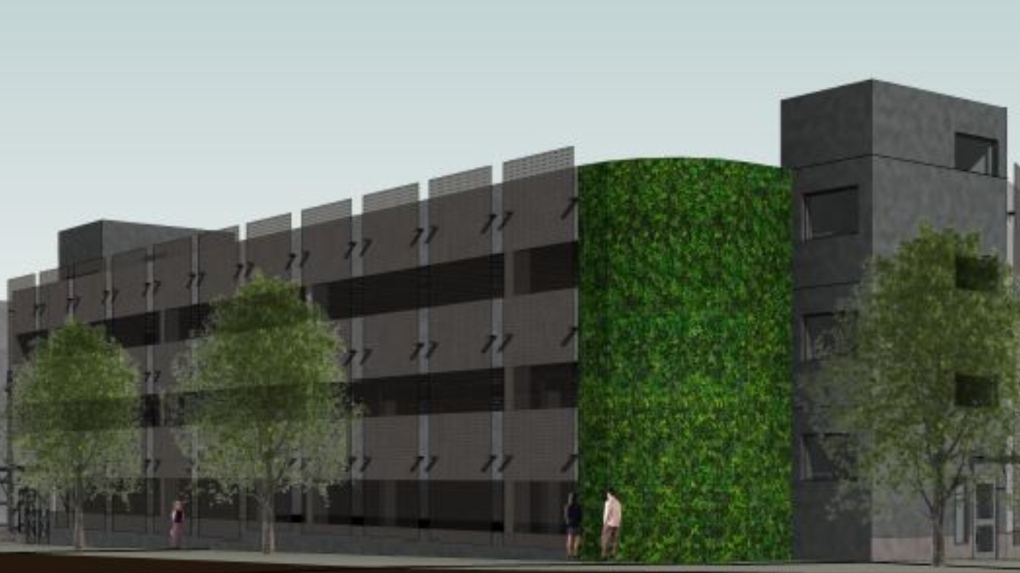 The building would be a precast concrete parking structure with access from both Summit Avenue and Nanaimo Street. (City of Victoria)

VICTORIA – The City of Victoria has received a proposal for a four-storey parking facility on the site of a former Royal Canadian Legion branch.

City staff received a letter on Nov. 8 from the architect for the redevelopment of the Summit Avenue site and an adjacent surface parking lot. The proposal is to build a four-storey car storage facility for local car dealerships

"There is no public component to the building," wrote architect Brain Kapuscinski of BJK Architecture Inc. in his letter to mayor and council.

"Car jockeys will move cars in and out of the building daily. No other occupants are expected or allowed into the secure facility."

The building would be a precast concrete parking structure with access from both Summit Avenue and Nanaimo Street.

"No public amenities are planned for the development, although one façade of the building will receive a three-storey art piece applied to the building exterior," wrote Kapuscinski. "The project is industrial in nature, as is the neighbourhood."

The proposed parkade is not unlike an existing three-storey car storage structure at the new Audi, Alpha Romeo, Maserati and Fiat dealership located at the corner of Summit Avenue and Douglas Street.

Unlike the existing dealership parkade, which has an adjacent surface lot, no surface parking is planned on the former legion site. There is also no bicycle parking or public seating as part of the proposed plans.

The letter to mayor and council does not indicate which dealership or group of dealerships intend to use the proposed storage parkade.

The application for the parkade is in its early stages and is currently before city staff for review. After review, staff may provide comment to the applicant before a report is prepared for the city planner. The report would then be presented to council for consideration at a later date.

CTV News reached out to Kapuscinski for comment, but has not received a reply.