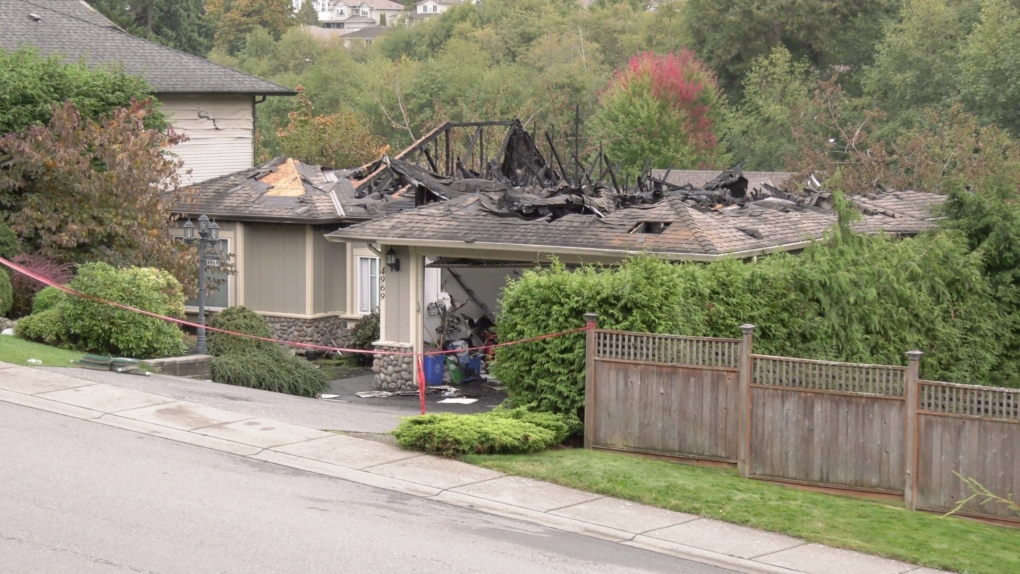 Crews were called to a home on Ney Drive around 1:45 Friday morning and found the occupants – a family of four upstairs and two more living downstairs – had already made it safely out. (CTV)

Six people are safe following an early morning house fire in Nanaimo, which fire officials say started as the occupants were trying to keep their pets warm.

Crews were called to a home on Ney Drive around 1:45 Friday morning and found the occupants – a family of four upstairs and two more living downstairs – had already made it safely out.

"It was an accidental fire as far as I'm concerned," said Nanaimo Fire Department's Ennis Mond. "There's nothing there that was nefarious or anything, they just moved their pets outside to live in cages, they wanted to keep them warm."

Mond said the fire started when a heat lamp on the cage came into contact with some foam that was being used to insulate the cage for the animals.

"The foam ignited, caught the vinyl siding on fire and extended up, took out the deck above, eventually into the soffits and the roof," Mond said.

Neighbour John McAllister lives across the street and was first alerted to the fire around 2 a.m. He says by then the front half of the house was already gone.

"The firefighters seemed to fight it from the front to the back, by the time we watched it they had it mostly under control," McAllister said.

He said he checked in with the neighbours who had escaped and made sure everyone was okay.

"It was kind of a shock waking up at two in the morning and seeing the house across the street from your house on fire," McAllister said.

Two homes on either side of the structure also sustained some damage. Both had melted vinyl siding and one was also water damaged in the interior when firefighters tried to keep the fire from spreading.