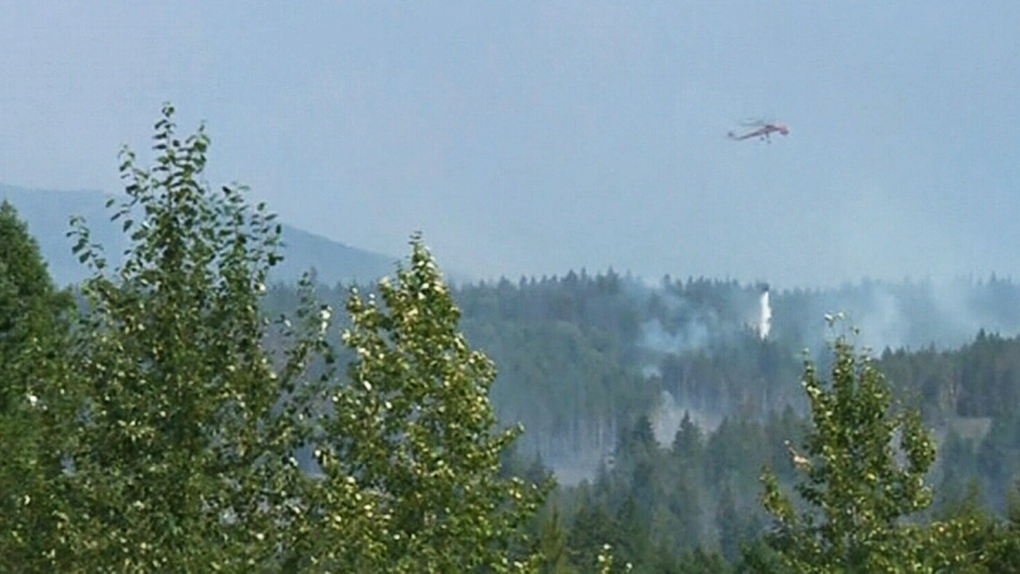 NANAIMO, B.C. - A logging company employee has died while working at a wildfire in the Nanaimo Lakes area on Vancouver Island.

The province's workplace safety authority confirmed a TimberWest employee was found dead in a vehicle south of Nanaimo around 10 p.m. on Monday.

“The worker was not a firefighter. Early information indicates the worker was making a delivery to forest wildfire fighters,” WorkSafeBC spokeswoman Trish Knight Chernecki said.

She said a WorkSafe investigator was sent to the scene. Knight Chernecki said the death was not related to a crash but could not give any more details, including the person's name, age and gender.

The BC Wildfire Service confirmed there was a “medical incident” at the fire overnight on Monday.

When contacted for comment, TimberWest said information would come from the wildfire service.

There are currently 462 fires burning in British Columbia, a much higher number than the 130 fires reported on the same date one year ago.

A cooling trend is forecast for the province, but firefighting officials say the change in the weather is likely to be accompanied by intense lightning capable of igniting more forest fires.

Kevin Skrepnek, B.C.'s chief fire information officer, said Wednesday the heat should let up across the province by Friday, but with that comes forecasts of thunderstorms, lightning strikes and only small amounts of rain.

He said the amount of rain in the most recent forecast is between three and five millimetres, which is not enough to ease the extreme fire conditions across B.C.

“The real day we are focusing on right now is Friday,” he said from Kamloops. “We do expect a pretty dramatic shift in the weather.”

Skrepnek said the forecast predicts the break down of the high pressure ridge that has brought record high temperatures to much of the province.

“Unfortunately, with the system coming through we are expecting a cold front that is going to bring about increased winds and that is more than likely going to bring some thunderstorm activity with it,” he said. “We are bracing for it to be a challenging day.”

Forests Minister Doug Donaldson said he took an aerial tour Wednesday of the fire zone in central B.C. where he saw thick plumes of smoke, trees in flames and recent fire damage to area forests. He said he was accompanied by Public Safety Minister Mike Farnworth.

“This year the fire season seemed to start later, but it's more widespread than last year with wildfires of note in all areas of the province,” said Donaldson, in a telephone conference call from a government forest office at Burns Lake.

He said last year's record fire season that saw the city of Williams Lake evacuated was concentrated in the Cariboo and southern Interior regions while this year wildfires are hitting all areas of B.C., including Vancouver Island, the north and the Interior.

The major fires of concern include a wildfire in Telegraph Creek in the province's northwest and a large blaze south of Keremeos, he said.

Donaldson said Telegraph Creek is located near the Alaska border and Keremeos is near the eastern Washington state border.

He said he's tried to get into Telegraph Creek to survey damage from the ongoing fire that destroyed or damaged two dozen buildings, but has been turned back twice due to thick smoke.

A crew of firefighters from Yukon travelled to the community Wednesday to assist in the battle.

The crew is managed by the development arm of the Ta'an Kwach'an Council, a First Nation in the Whitehorse area, and spokesman Ben Asquith said the call for assistance came from former Yukon politician Darius Elias, whose parents live in Telegraph Creek.

Farnworth said there are currently 22 evacuation alerts in areas across B.C., which mean that residents must be prepared to leave at a moment's notice.

There are also 17 areas that have been evacuated due to extreme fire danger, with the largest being in the Telegraph Creek area, where 250 people have been ordered to leave.