An out-of-control wildfire burning near Nanaimo has grown to 179 hectares and is now 25 per cent contained, according to the Coastal Fire Centre.

While the fire is 25 per cent contained it's still considered to be out of control, the fire centre said.

It is also considered an interface fire, and evacuation orders and alerts have been issued by the Regional District Of Nanaimo, which has declared a state of local emergency.

The evacuation order is in effect for anyone west of the Nanaimo Lakes fire area, while 77 homes east of the fire are on evacuation alert, meaning they're being asked to prepare to leave at a moment's notice.

So far, the actual evacuations have been limited to campers staying in the area.

The BC Wildfire Service has 64 personnel and seven helicopters attacking the blaze, which is suspected to be human-caused. 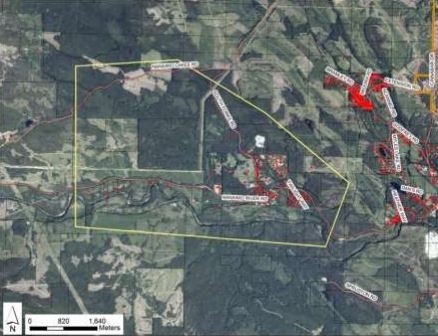 The boundary for the 77 homes on evacuation alert due to a wildfire burning near Nanaimo Lakes is shown. (Regional District of Nanaimo)

As the Nanaimo Lakes fire grew slightly overnight, a new wildfire sparked near Lacey Lake in the Beaufort Range, northwest of Port Alberni.

The blaze, discovered around midnight Tuesday, was estimated to be five hectares in size as of Wednesday morning and is visible from Highway 4 and Port Alberni.

The wildfire service has sent two helicopters and 11 firefighters to battle it.

Despite the fire being out of its jurisdiction, the Cherry Creek Fire Department has also sent personnel. ,

It comes after a small 2.1-hectare fire south of Turtle Lake, also near Port Alberni, was contained by crews on Wednesday.

All three fires that have broken out on Vancouver Island in the past week are suspected to be human caused.

With weather expected to get even hotter up until Friday, the Coastal Fire Centre is pleading with people to comply with campfire bans and practice safety with cigarette butts.

"People are starting them and we need them to stop," said fire centre spokeswoman Donna MacPherson.

The weather is expected to bring a cold front on the weekend, MacPherson said, but the bad news is that it looks like any precipitation will be spotty – and heavy wind and lightning could hit the area.