Smoke visible as wildfire breaks out on North Cowichan mountain 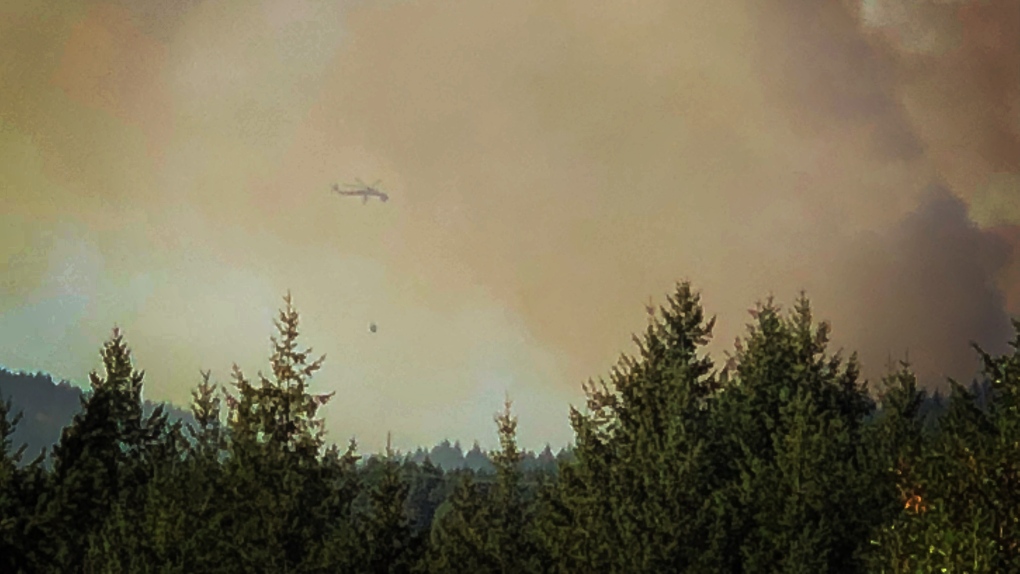 A firefighting aircraft is shrouded in plumes of smoke from a 1.1-hectare wildfire that broke out on Maple Mountain in North Cowichan Wed., Aug. 8, 2018. (Courtesy Jade Robinson)

A small out-of-control fire has broken out in the Cowichan Valley – the fourth wildfire to hit Vancouver Island in the last few days.

Crews rushed to Maple Mountain, near Crofton, after the estimated 1.10-hectare wildfire was discovered Wednesday afternoon.

The Municipality of North Cowichan reported that multiple fire departments and the BC Wildfire Service were responding to the blaze, which is located about one kilometre east of a parking lot at the Municipal Forest Reserve on Osborne Bay Road.

Osborne Bay Road is now closed at Herd Road and Chilco Road as crews try to contain it, while the public is being asked to avoid the mountain entirely.

Many residents in the area posted pictures of smoke rising from the mountain to social media.

The BC Wildfire Service said it has sent four firefighters and three helicopters to assist Maple Bay Fire Department, which is the lead agency handling the wildfire.

If any evacuations are required, North Cowichan said it would sent out alerts through its eAlert system. As of 5:30 p.m., it said localized tactial evacuations were underway where needed, but no large-scale evacuation was required yet.

Those who live in the region and want to sign up for eAlerts can do so on North Cowichan's website.

There have been several new wildfires sparked on Vancouver Island in recent days, including a 160-hectare blaze near Nanaimo Lakes.

Three wildfires this week are suspected to be human-caused, prompting the wildfire service to remind the public to use extreme caution in all outdoor activities. A campfire ban is currently in effect for all of the Coastal Fire Centre with the exception of the "Fog Zone" running along the western edge of Vancouver Island.

While hot weather is expected for the remainder of the week, temperatures are expected to dip on the weekend.

But it's not all good news, as the wildfire service says stronger winds and a risk of lightning are expected along with the weather change.