In the grips of a crisis, a Victoria pharmacy is hoping to arm drug users with information that could save their lives.

STS pharmacy on Cormorant Street is the city's only location where a user can test their heroin, cocaine and other street drugs to see if they’ve been tainted with other substances, like the deadly opioid fentanyl.

But pharmacy staff say they’re finding fentanyl in 95 per cent of the tests they administer, and frontline workers say they have to do better.

“Right now there is only a test that can tell you whether or not fentanyl is present,” pharmacist Jared Aasen told CTV News. “But it cannot tell you how much, and that is really the money question.”

Facing the constant death toll of B.C.’s illicit drug crisis – 914 people were killed by overdoses last year – the pharmacy partnered with University of Victoria chemists to forge a new path.

Pharmacists say the free test they currently offer only gives an indication if fentanyl is present in the hit of drugs, but falls short of telling a person if that hit could be deadly.

This is where Dennis Hore and his team at the University of Victoria come into play. 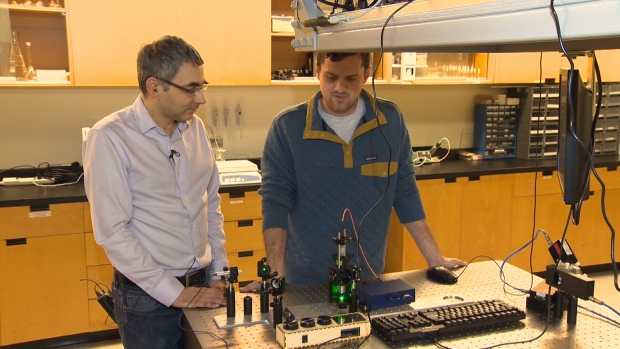 Dennis Hore, left, and his team at the University of Victoria are working to create an affordable, compact and accurate fentanyl test which can tell a user if their next hit could be their last. March 2, 2017. (CTV Vancouver Island)

“What can we offer that will be useful to society, that will be compact, low cost and easy to use?” said the chemistry professor.

With the help of a federal grant, pharmacists and chemists got to work.

Their goal was to create an affordable, compact and accurate fentanyl test which can tell a user if their next hit could be their last. The team is close to a breakthrough.

Drawing on highly expensive technology usually reserved for airports and law enforcement agencies, the chemists are working to create a handheld device which uses lasers to identify different molecules in a substance.

The device would be able to not only identify if fentanyl is present in a sample of street drugs, but in a matter of seconds it would give an accurate picture of how much of the killer substance exists.

Six months into the project and pharmacy staff are hopeful they could have a working prototype in less than a months’ time.

The long-term goal for the pharmacy would be to link the device to smart phones and get them in the hands of outreach workers on the front lines of Canada's growing opioid epidemic.

Outside of the downtown pharmacy, recovering addict Wayne C. says many users are standing firmly behind the ambitious idea.

"I’ve overdosed eight times," said Wayne, "and if I would have had that tool I would have saved myself many a time.”