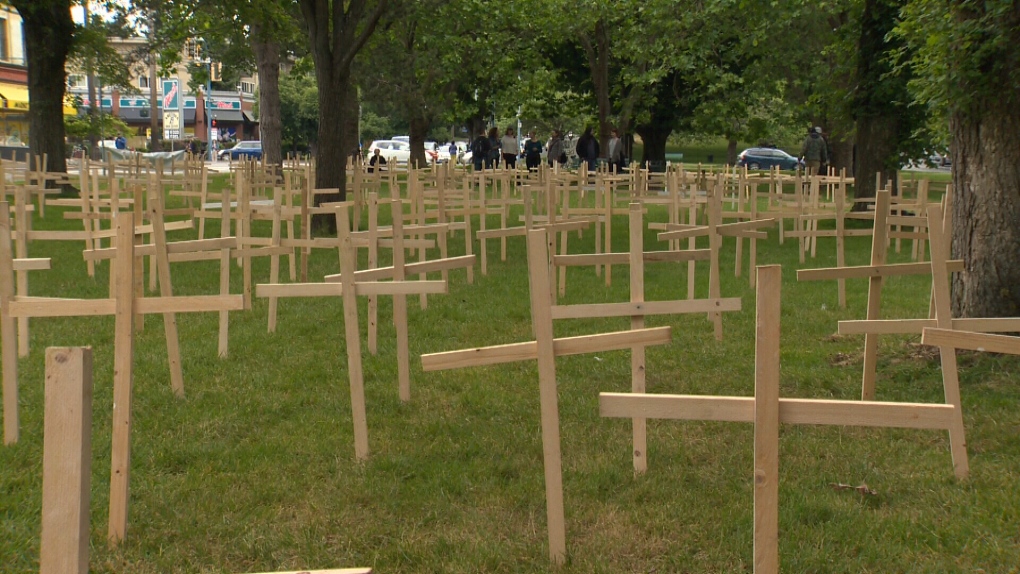 The Yes to Supervised Consumption Services Campaign placed 600 crosses in the park between Cook and Vancouver Street on Wednesday. June 1, 2016 (CTV Vancouver Island)

Hundreds of crosses were erected in Harris Green Park this week, symbolizing the number of overdose deaths predicted for 2016.

The Yes to Supervised Consumption Services Campaign placed 600 crosses in the park between Cook and Vancouver Street on Wednesday. The crosses give physical form to the 600-800 people the province of B.C. predicts will die this year from drug overdoses. That would be a major jump from the 480 fatal overdoses reported last year.

The Yes2SCS campaign is calling on immediate action and say safe injection sites would prevent these deaths from happening.

“It provides people with a safe and clean space to use their drugs. It provides them many supports and accesses to health care services, different kinds of counselling support, housing options, all kinds of connections that people wouldn’t otherwise have,” SCS committee member Alex Holtom told CTV News.

According to the local health advocates, no one has died from an overdose inside one of the 90 supervised consumption facilities that exist worldwide.

The group says people fail to realize that drug use will exist regardless of whether people are able to use them in a safe place or not.

Safe injection sites will provide individuals with access to clean supplies and support as well as education on detoxes and treatment centres.

The group says Bill C-2, the Respect for Communities Act, currently stands in the way of injection sites from coming to B.C. because it involves a lengthy exemption process.

“It’s very time consuming and there’s quite an expense to it. Essentially what it does is it makes it very, very hard for any safe consumption sites to exist within any communities at all,” Holtom added.

Even though there’s plenty of community support, the consumption services campaign says Island Health needs to fully get on board and commit to funding.

“I think what we might end up seeing in Victoria is not just a specialized site, but also some secondary sites across the city at different locations,” Holtom said. “That might be something more like an injection room with just a couple of booths as opposed to a big specific site.”