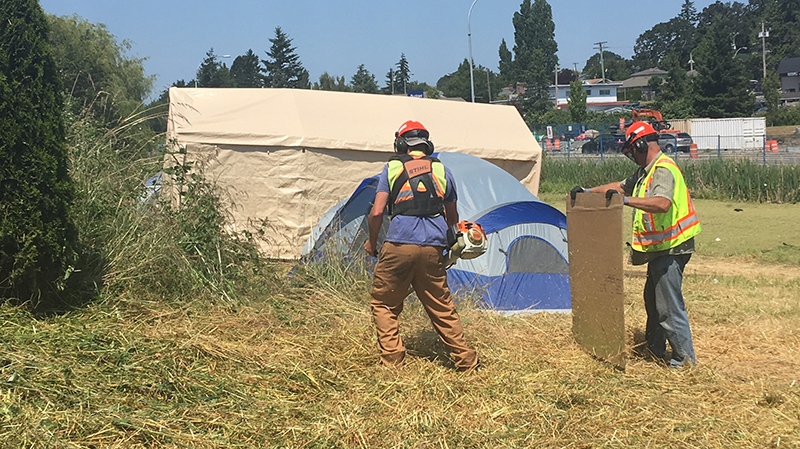 Parks staff were out in force, trying to make the Regina Park encampment less of a fire danger.

The orders, issued on June 8 and June 15, identify fire hazards including tall grass that had not been removed, and tents placed too closely to each other or to wooden fences at nearby homes.

With temperatures soaring, enforcement of the order was deemed a priority.

The efforts of the fire department were generally well received by campers. Encampment spokesperson Chrissy Brett welcomed the removal of the tall grass.

Brett said she’s confident the campers will be able to comply with the terms of the inspection orders.

“I think achieving some of the fire department’s concerns…are things that can be met," she said.

But she bristled when asked whether the inspection orders might be part of a larger strategy by the municipality to move the campers out of the area.

“I would hope that in this day and age they would truly be concerned about people's well-being and safety," said Brett. "We’re dropping the most concerning things off the top of the list first in our community just like tent city at the courthouse was willing to work with authorities to make things safer.”

The District of Saanich issued a release Tuesday clarifying that the enforcement action had nothing to do with trying to get campers to move on.

Brett said there are now 77 tents in Regina Park, which is located right off the Trans-Canada Highway near Uptown Mall.

She maintained the campers will not leave until there is more affordable housing and a homeless shelter built in Saanich.

She pointed out a buildable shelter waiting to be opened that was donated to the encampment by a private citizen. She said the shelter will be raffled off for use at the park to a camper in the coming days.