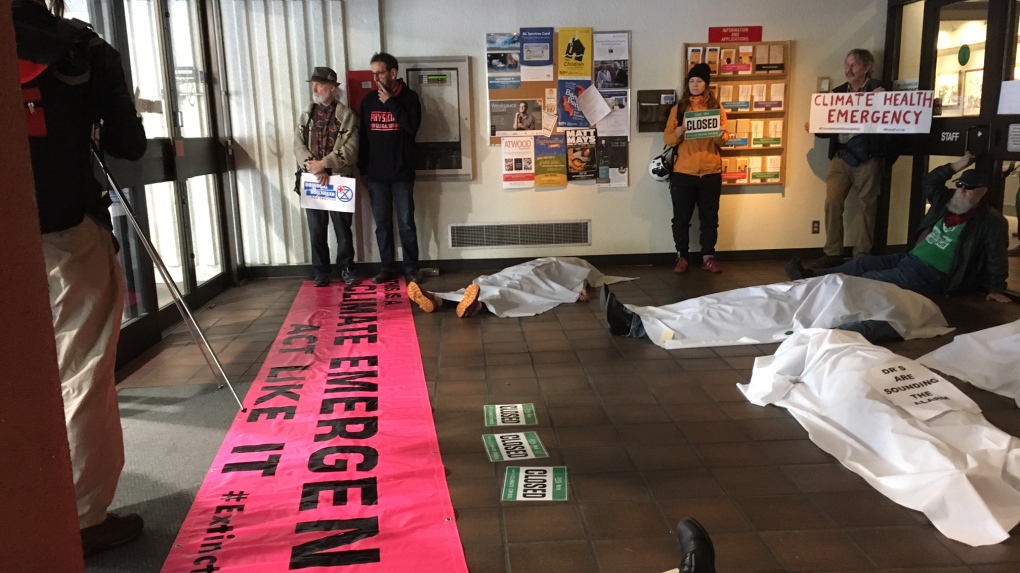 In a mid-day protest, members of the Extinction Rebellion movement took over the lobby of the B.C. Ministry of Health building on Blanshard Street in downtown Victoria on Thursday.

There were around a dozen protesters, with some holding signs saying, "Climate Health Emergency". Meanwhile, others lay on the floor, completely covered with a white sheet bearing messages such as, "wake up and smell the coffin".

"Climate change is going to affect everybody, there is no escape", says Dr. Jonathan Down, a developmental pediatrician in Victoria.

"We are expressing our concern and would like a response, a concrete response."

Dr. Down was at the demonstration to support the group and talk about why it's important for him to get involved with climate action.

"At a global level, the population of children and their families that are going to be affected actually are being affected right now by the climate changes that are occurring."

He also expressed concern that militaries around the world are exempt from greenhouse gas emission standards and he would like to see that changed.

Another doctor at the event who was adding his voice to the call for action was Dr. Peter Carter, founder of the Climate Emergency Institute and co-author of the book "Unprecedented Crime - Climate Science Denial and Game Changers for Survival".

"Our children in Canada and across the world are going to face a really terrible, insecure future", says Dr. Carter.

"We, particularly those my age, we really have to be working to protect them — protect their future as best as we can."

The peaceful demonstration lasted for about an hour, employees were allowed to come and go freely, and there was no sign of police.