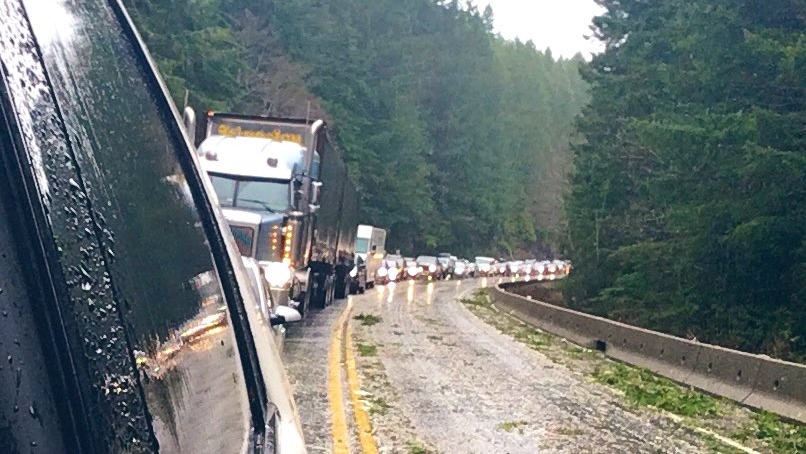 Wind toppled trees in the area around Port Alberni, closing traffic on the section of Highway 4 known as "The Hump."

BREAKING: Hwy4 is closed from #PortAlberni west past #CameronLake until the morning. Several trees down and will take all night. Vehicles are being turned around near the top of #TheHump. @CTVNewsVI pic.twitter.com/iQ6yRijVpz

North of Qualicum Beach, Highway 19A was shut down in both directions due to a tree on the road between Sunnybeach Road and Charlton Drive.

Earlier in the day, another toppled tree fell across Highway 4 near Port Alberni, blocking the route to traffic for a couple of hours.

The route, also known as the Pacific Rim Highway, is the only highway connecting west coast towns like Tofino and Ucluelet to the east side of Vancouver Island.

At around 11:15 a.m. the tree had been cleared and Drive BC said the route had reopened to traffic.

Highway 14 between Port Renfrew and Jordan River was also briefly closed at 11 a.m. due to downed hydro lines between Parkinson Road and Old Switchback Road. That route reopened not long after, around noon.

There were also reports that fallen trees had blocked the main road in and out of the community of Youbou.

Some tree damage in central #portalberni from the storm so far. Tree across North Park Drive near 9th Avenue. And a BBQ tipped over in someone's backyard. #alberniwxstorm pic.twitter.com/nCjf7u8RMN