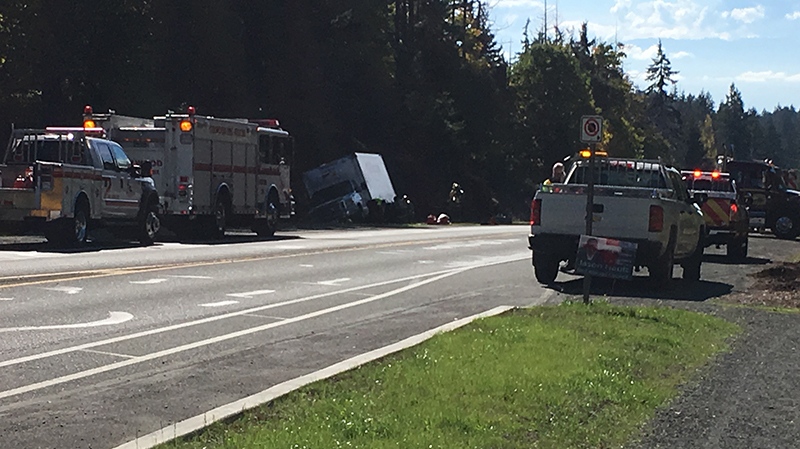 Veterans Memorial Parkway in Colwood was closed from Cairndale to Latoria roads as crews dealt with the crash and subsequent fuel spill. Oct. 10, 2018. (CTV Vancouver Island)

A major West Shore route was closed for hours after a three-vehicle car crash resulted in gasoline spilling onto the roadway.

Veterans Memorial Parkway in Colwood was closed from Cairndale to Latoria roads as crews dealt with the crash and fuel spill Wednesday.

First responders arrived to find a vehicle was in a ditch along the road while another was partly leaning into the ditch.

"Upon further investigation, there ended up being a third vehicle involved which was farther down Veterans at Sooke Road," said Colwood Fire Asst. Chief Greg Chow.

The crash caused gasoline to leak into the ditch from one of the trucks involved. Chow said the gas dissipated and there would be no cause for concern. Crews had to siphon gas from the leaking tank by hand before the vehicle could be towed.

Two people were taken to hospital for observation, but the extent of their injuries were unclear.

Details about what caused the crash are unclear. A photo from the scene showed what appeared to be a Budget rental truck leaning into a ditch on the side of the road.

Police tweeted just after 1 p.m. that the road remained closed. The route eventually reopened at around 2:30 p.m.

Drivers were asked to use alternate routes while the closure was in effect.

VMP is still closed. Emergency Crews are working to make the roadway safe for everyone. Please use alternate routes. Updates to come. #yyj