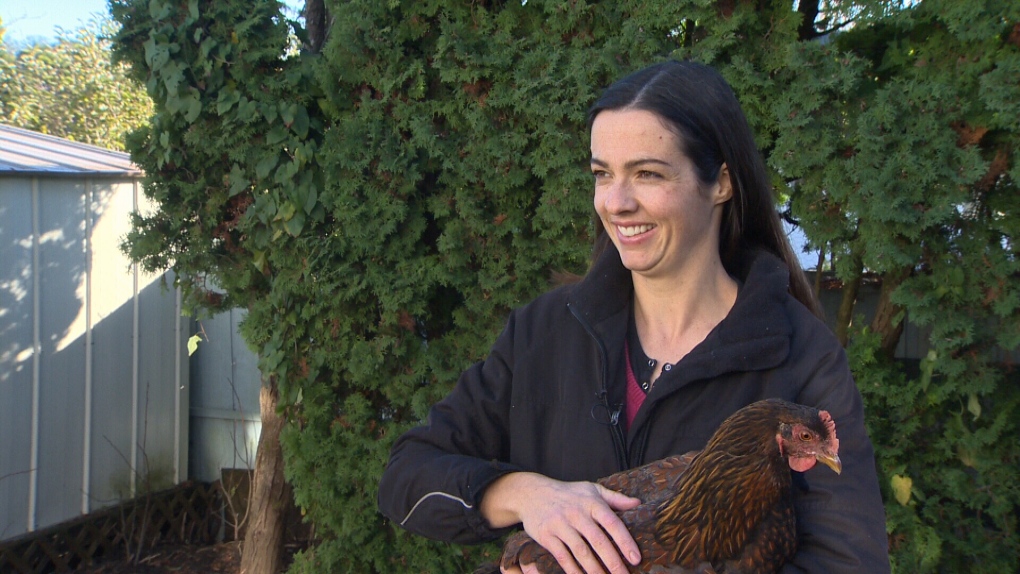 Fraser, 34, says she always wanted to be a farm girl, and this month she helped other would-be farmers with similar dreams of eating yard-to-table fresh eggs by renting out several dozen chickens.

Fraser is one of two Rent The Chicken operators in British Columbia and among eight across Canada.

"Renting is the way to try it out without committing to buying and building your own coop and raising your own chicks, and finding out they are actually roosters instead of hens," said Fraser. who lives in Saanich, a suburb of Victoria. "It's a way for you and your family to try out chickens. They are fun to have around."

Rent The Chicken comes with two or four egg-laying hens, a mobile coop, food and water dishes, and a food supply, including dried meal worms, which chickens apparently love.

The rental fee ranges from $425 for two hens and $600 for four hens for six months, from May to October.

Renters have the option of adopting their hens at the end the six-month period for a fee of $250 for two hens or $350 for four hens. The coop is included.

"I've already booked all my rentals for 2016," said Fraser. "There's a wait list. We sold out by February and people just started getting their orders."

Lucy Hewlett said she's happy with her rental chickens so far but she has yet to decide on adoption.

The avid vegetable gardener in Colwood, near Victoria, said she viewed the rental as an opportunity to test raising farm animals.

"It seemed affordable and practical," Hewlett said. "I'd always wanted fresh eggs and having an organic option. So, it fit in in many ways."

She said her two hens started producing eggs within the first week.

"I've had half a dozen in less than a week," said Hewlett. "They're delicious. I had a really nice egg this morning for breakfast."

Rent The Chicken co-founder Jenn Tompkins said the rental business started in 2013 in Freeport, Pa. There are 31 locations in the United States.

Rent The Chicken started in Canada last year in Moffat, Ont., near Toronto. There are two other Ontario locations and one each in New Brunswick, Nova Scotia and Prince Edward Island. The other B.C. location is in Kamloops.

Tompkins said many people want their food source close to their homes.

"We provide an opportunity for families to try out having backyard hens for fresh eggs without the long-term commitment," she said. "We like to say if they chicken out, we pick up the chickens, the coop, their supplies with no questions asked."

Fraser said her chicken rentals have become a labour of love. She learned to build the coops in the family garage.

"I decided I wanted to do it myself rather than have someone build it," she said. "I've really enjoyed the learning."

Fraser puts Dr. Donna on the front lawn and the hen immediately begins pecking for food.

"There's a large pet factor for chickens, too," she said. "They're great entertainment."