They may look harmless, but urban deer have been anything but cute and cuddly in Greater Victoria this week.

According to witnesses, a car crash was triggered by a buck chasing a doe into traffic in Saanich Wednesday – just two days after an aggressive deer attacked a woman and her dog on the South Island.

The chain-reaction crash occurred on the Pat Bay Highway near McKenzie Avenue in the afternoon, sending people in two vehicles to hospital with minor injuries.

On Monday, a woman jogging with her dog on Quamichan Street in Fairfield found herself face-to-face with a buck, startling them both.

A witness told CTV News that deer went up on its hind legs and stomped on the dog with its front legs, then hit the woman with its antlers.

Hours later in Oak Bay, another dog was attacked by a buck – but it’s unclear whether it was the same one.

In another sighting, a CTV News viewer sent in a photo from Saturday showing a deer walking right along Douglas and Herald Street downtown, just steps from City Hall. 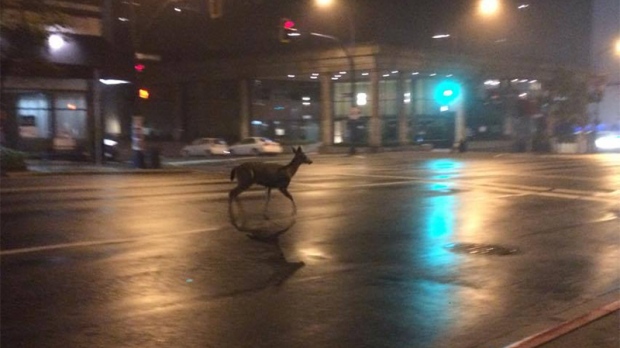 While Victoria Mayor Lisa Helps calls the deer conundrum a provincial issue, others are calling Wednesday’s crash yet another example of an urban deer problem that needs to be addressed.

Esquimalt residents have been receiving a targeted survey asking questions about how to deal with the township’s ballooning deer population.

“Well right now we need the results of the cull, but I would say that we may need to look at population control,” said Esquimalt Acting Mayor Lynda Hundleby.

“We showed that we could run a program without interference and without any criminal behaviour from people, and do it successfully,” said mayor Nils Jensen. “It certainly is a regional issue. There has been some talk about having a wildlife management service that covers the whole region.”

Jensen is calling for more support from the province to control the deer population before someone else is hurt.