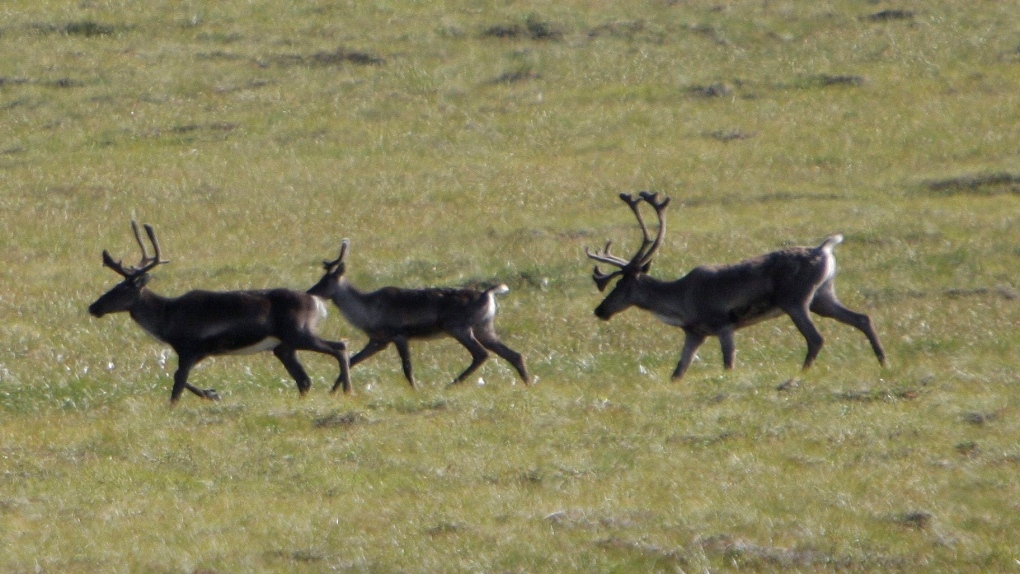 Migrating Caribou are shown in the Porcupine River Tundra in the Yukon Territories, Canada on August 12, 2009. A former cabinet minister who resigned as Premier John Horgan's liaison to help drive recovery plans for threatened caribou herds in northeastern British Columbia continues to push for more voices at the planning table to increase support for conservation efforts. Local governments need more say in future land use decisions that relate to caribou protection to win broader public support for the recovery strategy, Blair Lekstrom said in a recent interview. THE CANADIAN PRESS/AP, Rick Bowmer

VICTORIA -- A former cabinet minister who resigned as Premier John Horgan's liaison for the recovery of threatened caribou herds in northeastern British Columbia says he wants more voices in the discussion to increase conservation support.

Lekstrom, a former B.C. Liberal energy and mines minister, recently quit as Horgan's liaison, saying the B.C. government was not prepared to change a draft agreement between the federal government and the area's West Moberly and Salteau First Nations.

“We've got governments, both federal and provincial, prepared to sign this partnership agreement when they don't know the socio or economic impacts of what this means to the region or the communities,” he said. “I've never seen anything like it. If we find out it costs the possibility of hundreds of people losing their jobs, I guess so be it.”

Lekstrom wants the B.C. government to endorse minor changes to the draft agreement to include local governments and said he is aware that Horgan has stated the province cannot make unilateral changes because it requires the consent of all parties.

“To sign an agreement that's 30 years in duration without local government having a seat at the table is just beyond anything I could support,” said Lekstrom. “You have to wonder: is this somebody's pet project in the federal and provincial governments that come hell or high water they don't care about the region up here and they are going to sign it.”

B.C. government figures indicate the Dawson Creek and Chetwynd areas in the Peace River region have six caribou herds, but their numbers have declined from 800 to about 220 over two decades.

Lekstrom pointed to recent provincial caribou recovery team meetings in Williams Lake where the province is collaborating with local governments, First Nations, industry and other stakeholders on management programs for threatened Caribou herds in the Chilcotin region of central B.C.

In May 2018, the federal environment minister said southern mountain caribou faced an “imminent threat” to recovery in 10 local populations across B.C. The declaration set the stage for the federal government to issue an emergency order under the Species at Risk Act to protect the caribou.

Such an order could include cutting off habitat areas to economic and public activities.

The statement said B.C.'s southern mountain caribou are “an at-risk species that requires urgent action. If we don't act now, we could lose the caribou forever.”

Charlotte Dawe, a Wilderness Committee caribou campaigner, said a recent study of 80 years of data concluded more than 80 per cent of B.C.'s southern mountain caribou populations have lost habitat critical to their survival. She said both the B.C. and federal governments are not doing enough to prevent the herds from facing extinction.

“It's clear as day, if caribou are to have any chance at recovery, we need to stop destroying their critical habitat,” she said. “Every single population unit we looked at in that region has surpassed the threshold required for recovery and survival.”

Horgan appointed Lekstrom last year to bridge tensions between local groups, including back country enthusiasts and Indigenous groups, over the draft agreement's proposals to save threatened herds.

A report by Lekstrom last April made 14 recommendations, including the call for more local involvement. An interim moratorium on signing the recovery program was introduced following Lekstrom's report.

“I've done all I could in what I was engaged to do as a liaison to the premier,” he said. “It became clear they weren't going to listen to anything I said.”

A statement from the Ministry of Forests, Lands, Natural Resource Operations and Rural Development said technical sessions are ongoing in the Peace region to implement protection measures for caribou, but there was no comment on changing the draft partnership.

“We know it's important for local governments to be heard and be involved, that's why we have been working hard to ensure they have a larger role in this work,” it said.

This report by The Canadian Press was first published Feb. 2, 2020.