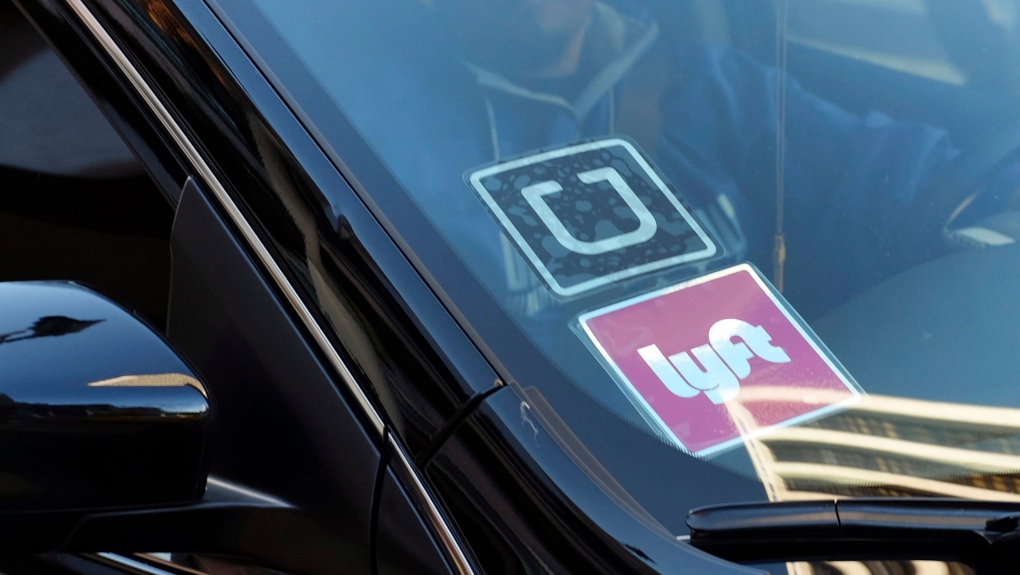 A ride share car displays Lyft and Uber stickers on its front windshield. The British Columbia government's firm position on tougher driver's licence requirements for ride-hailing is a move in the right direction, given the experiences from other jurisdictions, a transportation expert says. (THE CANADIAN PRESS/AP, Richard Vogel)

The British Columbia government's firm position on tougher driver's licence requirements for ride-hailing is a move in the right direction, given the experiences from other jurisdictions, a transportation expert says.

“I would applaud the B.C. government for standing up, because most other governments have basically stood down,” said Garland Chow, an emeritus associate professor at the University of B.C.'s Sauder School of Business.

The B.C. Transportation Ministry updated safety, insurance and penalty rules and regulations this month and set Sept. 3 as the date ride-hail companies can apply to enter the market. Rules covering fares drivers can charge, vehicle boundary zones and the numbers of ride-hail vehicles allowed on the roads are due to come this summer, the ministry said.

Chow said other jurisdictions have had push back from the large ride-hailing companies over licence restrictions and safety concerns, but B.C. has the opportunity to get it right before the service takes to the streets.

The provincial government is holding firm that ride-hailing drivers have a Class 4 licence, like those held by taxi, limousine, ambulance and other commercial vehicle drivers, as opposed to the Class 5 licence, held by most B.C. drivers.

Chow, who testified last January before the all-party legislative standing committee that produced proposed ride-hailing regulations, said he agrees with the licence requirement, for now. He noted the regulations allow for a review of the requirement after two years.

But both Uber and Lyft have said the requirement could be a deal-breaker for them in the province.

“Requiring commercial Class 4 licences for drivers will not improve safety, but will increase wait times and benefit the taxi industry,” said Zifkin. “Lyft does not currently operate ride sharing in any jurisdiction that requires drivers to change their driver's licence to a commercial driver's licence.”

Uber Canada said in a statement last week that Saskatchewan, Manitoba, Ontario and Quebec do not require ride-hail drivers to hold a Class 4 licence or equivalent. It said there is no evidence that such a licence provides more safety than a standard licence.

Chow, who's an economist with a statistics background, disagrees.

He has reviewed recent accident comparison data from the Insurance Corporation of B.C. that shows from 2012 to 2016 the accident rate for those driving commercial vehicles with the Class 4 licence is 13 per cent lower than Class 5 drivers.

The insurance corporation said in a statement that when the mileage difference between Class 4 and Class 5 drivers is factored in, one would reasonably expect that the Class 4 crash rate would be even lower.

Chow agreed that the accident difference could be dramatic for Class 5 drivers if road time is added to the equation.

Transportation Minister Claire Trevena said in a statement the requirement adds an extra level of safety for passengers, which is an issue the government continues to feel strongly about.

Class 4 drivers must be at least 19 years old, have at least two years of non-learner driver experience, have fewer than four penalty point incidents in the last two years and could be excluded over certain medical issues.

“We are not the only jurisdiction that requires taxi drivers or drivers of commercial ride-hailing vehicles to hold a commercial class of driver's licence: Alberta has this same requirement, New York City has an equivalent, and ride-hailing companies are complying,” said Trevena.

Chow said the other factor in the market is B.C.'s public auto insurer, which is floundering financially and has to set the insurance rates for these vehicles.

“If Class 5 licensees, indeed, have more accidents and all of the sudden a whole bunch of Class 5 people now go into the commercial world of driving other people, you're increasing the probability of a more costly accident because for sure that other vehicle is going to have people in it.”

The government has said the insurance corporation will have its product ready for the launch of ride-hailing in September. It will be a blanket, per kilometre insurance that applies when a driver is providing ride-hailing, with the driver's own basic insurance applying in all other instances.

Chow expects Uber and Lyft to continue to push to have the Class 4 licence requirement dropped in what he said would be an extended staring contest between the government and the companies.

“This is no different than me going to buy a house and I'm saying, 'there's no way I'm going to buy this house for more than this amount of money, period,' ” he said. “Yet I know I'm ready to negotiate a bit because I really want this house. It may be that this is part of negotiating gamesmanship.”