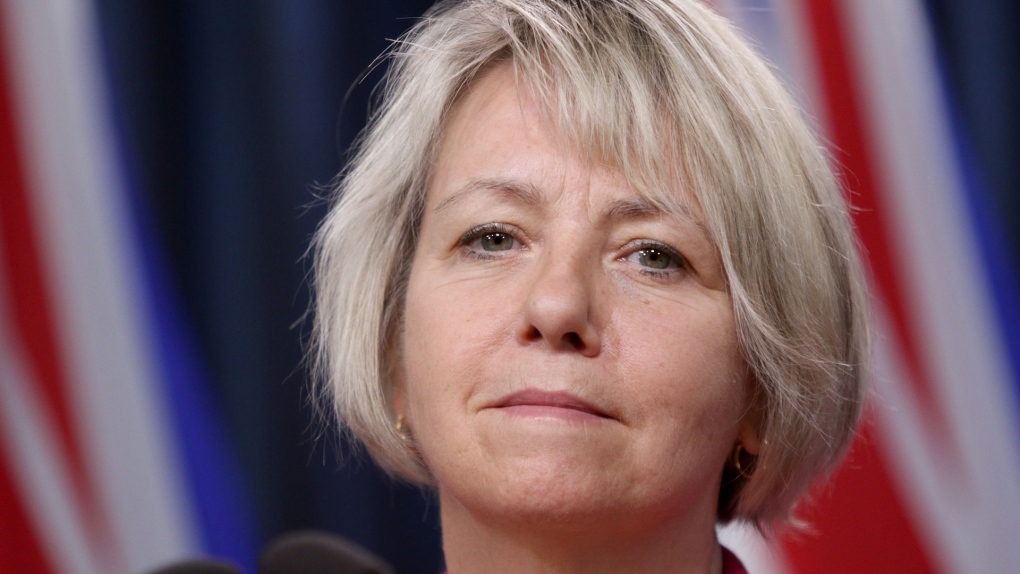 Provincial Health Officer Dr. Bonnie Henry is seen during a news conference at the B.C. legislature in Victoria, B.C., on Tuesday, Sept. 22, 2020. THE CANADIAN PRESS/Chad Hipolito

The new cases were detected over two days since Saturday. On Sunday, 536 cases were recorded and on Monday 462 cases were confirmed.

“As always, it pains us to know that people have succumbed to COVID-19 and we send our condolences to the families of these people, to their care teams who I know are also upset when we lose somebody and to our communities,” said provincial health officer Dr. Bonnie Henry.

B.C. has now recorded 18,714 cases of COVID-19 since the pandemic began. Of those cases, 4,891 are considered active, including 133 people who are in hospital for treatment, 43 of whom require critical care.

Two new health-care outbreaks were also discovered over the past two days, both at long-term and assisted living facilities.

On Monday, B.C.’s top doctor spoke on new temporary health orders that she enacted in two regions of the province Saturday.

The health orders were put in place specifically in the Vancouver Coastal Health and Fraser Health regions and will be in place until Nov. 23.

The new orders include a restriction on any indoor social gathering inside of a private residence, a restriction on indoor group fitness classes and a limit on non-essential travel within the two Lower Mainland health regions.

Workplaces must also actively screen for COVID-19 among employees every day. Henry encouraged businesses across the province to review their coronavirus safety plans as cases surge in B.C. as well.

Henry notes that many of the provinces’ recent COVID-19 cases have been linked to social gatherings, and the occasional large transmission event at an indoor group workout setting.

She said that the new health orders are not an indictment of these industries, but rather a response to an evolving situation.

“This is not a reflection of those businesses,” she said. “It is a reflection that we are continuing to learn about this virus.”

She stresses that not all gyms are closed in the Lower Mainland for the next two weeks. Instead, she says that activities that involve indoor group fitness are what are being impacted, like spin classes.

B.C.’s top doctor says new guidelines are being developed to help businesses restart these programs, including steps like reducing class sizes, installing barriers and improving ventilation. However, no finished guidelines have been released yet and Henry did not say when they would be available.

Henry adds that meeting with friends is still permitted outdoors in the Lower Mainland, so long as physical distance is maintained.

People can also still go out to restaurants with their households or with their 'safe six,' as recent COVID-19 cases have not been linked to eateries in large numbers.

“You can still go out for dinner but please follow the restaurant’s rules without exception,” said Henry.

At the same time, she encouraged residents in the Lower Mainland to participate in virtual social events or return to other creative and safe ways to check in with friends that were invented in the spring. She adds that British Columbians should consider “adjusting routines” so that they come into less contact with others as well.

Out of the nearly 1,000 new cases recorded in B.C. over the past 48-hours, 210 were discovered in the Vancouver Coastal Health region.

As of Monday, 9,171 people were under active public health monitoring due to COVID-19 in B.C.

Since the pandemic began, 13,425 people have recovered from the virus in British Columbia.

Despite Pfizer success, a lot has to happen before vaccine rollout in Canada: experts

Under the sea: research says whales, dolphins and more could get infected by COVID-19

World may be tired, but virus 'not tired of us': WHO chief

Have questions about a COVID-19 vaccine? We want to know