6 more dead in Washington state as governor orders all bars, restaurants to close to fight coronavirus 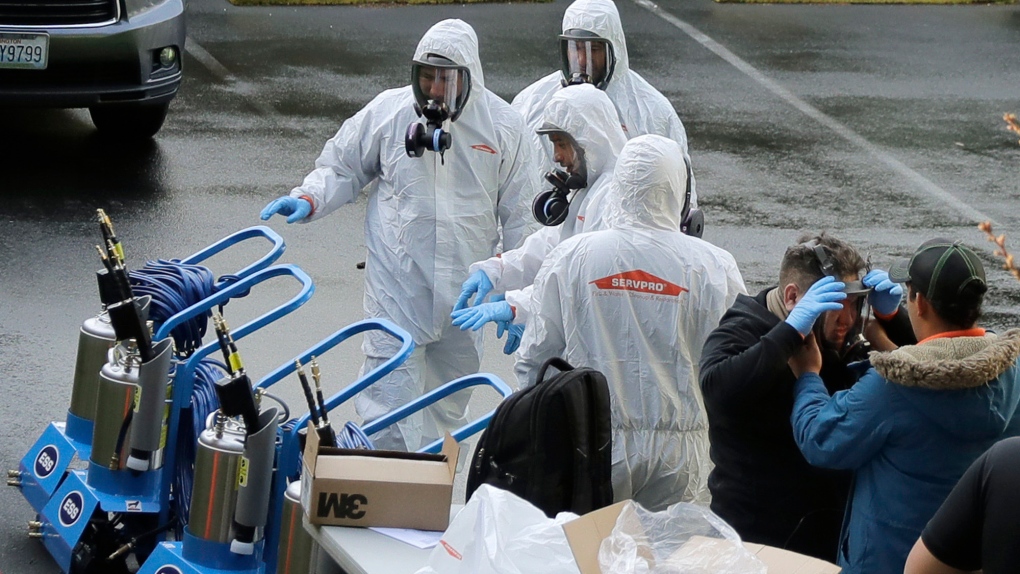 Workers from a Servpro disaster recovery team wearing protective suits and respirators more toward equipment as they line up before entering the Life Care Center in Kirkland, Wash. to begin cleaning and disinfecting the facility, Wednesday, March 11, 2020, near Seattle. The nursing home is at the center of the outbreak of the COVID-19 coronavirus in Washington state. (AP Photo/Ted S. Warren)

OLYMPIA, WASH. -- Washington Gov. Jay Inslee on Monday said he is ordering the temporary statewide closure of all bars, restaurants, gyms and other facilities to fight the spread of COVID-19.

Six more people died of the new coronavirus in King County, which is home to Seattle, health officials reported Monday. They ranged in age from 50 to 90 and included a resident of nursing centre in Redmond, Washington.

The number of positive cases in the state Monday rose to more than 900 including 48 deaths, state health officials reported.

Inslee said the ban, to be issued via emergency proclamation to be signed later in the day, wouldn't apply to grocery stores and pharmacies and that restaurants could continue take-out and delivery services.

The restrictions - which cover a range of facilities, including tattoo parlours, hair and nail salons and bowling alleys - will last until at least March 31 but could be expanded. The governor also revised his ban on events to prohibit gatherings of 50 or more people. Previously the size limit was more than 250. Gatherings of fewer than people are discouraged, and are prohibited if organizers don't ensure proper precautions.

“This is bigger than all of us, and I am fully confident that Washingtonians will rise to this challenge to get back to a normal state of our life as soon as humanly possible,” Inslee said at a news conference in Seattle, joined by Seattle Mayor Jenny Durkan, King County Executive Dow Constantine, and others. “But all of us have to recognize for the next several weeks, normal is not in our game plan.”

Inslee said he recognized the “enormous economic implications and social disruptions” will occur because of the closures, but he said that in the coming days work would be done to minimize those challenges.

“But today we know we are doing this for a simple reason, to save lives of our loved ones in Washington,” he said. “Hours count. It's not that weeks count, hours count. So we need very strong measures to reduce the extent and pace of this infestation.”

Other states have also moved to implement similar measures. California Gov. Gavin Newsom on Sunday called for all bars, wineries, nightclubs and brewpubs to close in the nation's most populous state. Oregon Gov. Kate Brown on Monday afternoon ordered the closure of bars and restaurants in the state for four weeks to fight the spread of coronavirus. The governors of Ohio, Massachusetts and Illinois also ordered bars and restaurants to shutter.

King County Executive Dow Constantine said that while he was grateful for those in the state who have changed the way they work and travel, it became clear to him over the weekend that the county needed to do more.

“Not all people are practicing appropriate social distancing and good health practices in every situation,” he said. “We are at a critical moment in this crisis.”

For most people, the new coronavirus causes only mild or moderate symptoms, such as fever and cough. For some, especially older adults and people with existing health problems, it can cause more severe illness, including pneumonia. The vast majority of people recover.

Inslee also made a personal plea to people aged 60 and over and those with underlying health risks, saying that they are at substantial risk, citing increased mortality rates.

“You need to self isolate, starting right now,” he said. “This is not a legal statement by the governor, but it's as strong as recommendation as I can possibly make.”

The White House on Monday also urged all older Americans to stay home and recommended everyone to avoid crowds and eating out at restaurants.

Tyler Baldwin, a bartender at the Taproom in Pike Place Market in Seattle, was mopping up Sunday night after learning about the upcoming closures.

Baldwin, 29, said the closure would be hard and that he will need to start “figuring out unemployment, food stamps, really whatever the next step to keep myself afloat is.”

Baldwin said there had been fewer and fewer customers in his bar the past few weeks, which is located in one of Seattle's biggest tourist attractions.

“I'm still in the throes of processing it,” he said. “It means I need to find a way to support myself from home.”

Constantine said he understands the financial hardships residents have been asked to endure, but he stressed that that people should assume that at this point, they and everyone they meet has been exposed and are potentially infected.

“Go to work if you must, but hunker down if you're able,” he said. “Postpone anything you can. Treat the next two weeks as a period of self-quarantine to protect yourself and the lives and health of your loved ones and of our community.”

Durkan said Monday that starting this week the city will provide $5 million in grocery vouchers to families enrolled in city child care and food assistance programs. The new program will provide 6,250 families $800 in vouchers in two installments to purchase food, cleaning supplies, and other household goods at any Safeway store in Washington state, she said.

“Our city has been working on many new unprecedented efforts as it relates to housing assistance, meals, and small businesses, but we know it is not enough for the families struggling,” Durkan said in a news release. “Ultimately, we will need an unprecedented relief package from Congress to address the long-term consequences for working people who are already feeling the impact of this global pandemic.”

Shutting the border and mandatory COVID-19 isolation? Trudeau says nothing's 'off the table'

Our window to flatten the COVID-19 curve is narrow, says Dr. Theresa Tam

Daily life near a standstill as nations try to halt pandemic

What should you tell your kids about coronavirus?

U.K. eyes plan to have over-70s isolate from virus for months

'Everything will be all right': Words of encouragement spread amid COVID-19 pandemic