A woman in her 60s has succumbed to her injuries following an early morning apartment fire in Saanich.

According to Saanich Fire Chief Mike Burgess, crews were called to reports of a structure fire on the corner of Richmond Road and Haultain Street just after 4:30 a.m Friday.

Firefighters found what they called a significant fire in the four-storey building.

The immediate concern was that several residents who were seen on balconies and told first responders they were trapped.

Four people were rescued by firefighters from apartment balconies.

Working quickly to douse the flames and enter the building, Saanich firefighters, along with back-up from other municipalities, were able to get to the upper floors.

While some people were rescued from balconies, one resident was found unresponsive in a fourth-floor hallway and has died from her injuries. Police, fire and the BC Coroners Service are investigating the death.

Just after 7 a.m. Saanich Fire said the blaze was under control. Roughly 50 people who live in the burned out building were evacuated.Immediately they were housed on a BC Transit bus and are receiving assistance at the Cedar Hill Recreation Centre.

Six apartment suites were damaged in the fire, officials said.

BC Transit Service and vehicle traffic on Richmond Road have been disrupted due to the fire.

"We're hesitant to say what caused it," Kowalewich said. "Anytime anybody perishes in a fire it's very significant."

This is a developing story and will be updated when new information becomes available. 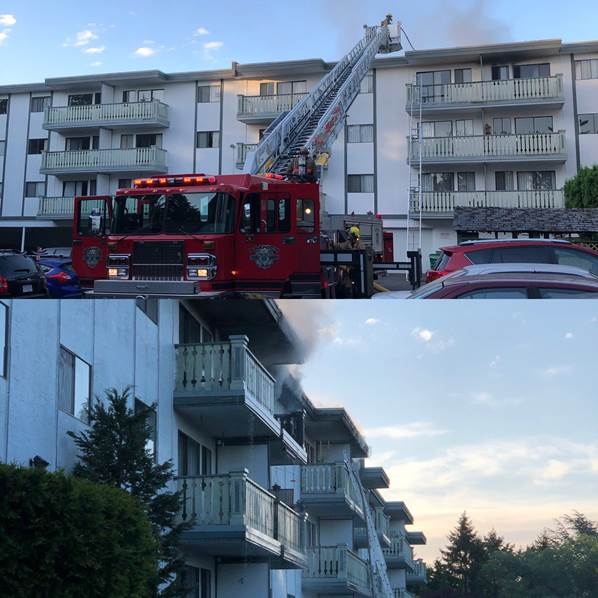