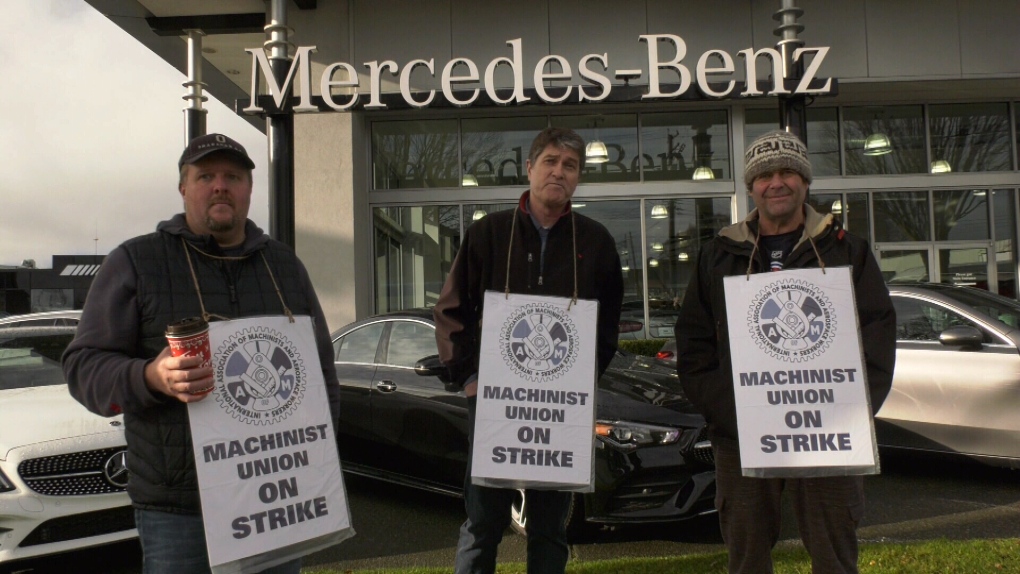 Unionized workers say they are looking for wage parity with other dealerships on the island: Dec. 13, 2019 (CTV News)

The Strike action affects a number of dealerships on the Island, including Three Point Motors in Victoria, Subaru of Nanaimo and Mercedes-Benz Nanaimo.

The unionized workers say they have been without a contract since the end August, and that they are looking for wage parity with other dealerships and the removal of language that restricts union activity in their collective agreement.

The union says there have been six rounds of negotiations, and that mediator Grant McArthur – who averted a massive SkyTrain strike in Vancouver earlier this month – has been brought in. The union says that the strike will last until management agrees to meet with the mediator again.

"It's a problem for all the employees and of course all the customers… it's going to hurt them too," said Andrew Tricker, a business representative for the International Association of Machinists and Aerospace Workers.

"It's not an easy decision, it's not something we wanted to do but we feel forced to do it," said Tricker. "We have no other option."

In a written statement, GAIN Group told CTV News, "We apologize to our customers and those employees who want to work for the inconvenience this has caused."

"Our technicians and other employees currently receive some of the highest wages, RRSP’s and benefits of any dealership on the island in addition to money for work boots and tools, comprehensive health and dental benefits, guaranteed hours of pay per week and much more," read the statement. "They are also comparable to the top dealerships in Vancouver."

Tricker told CTV News that the Three Point Motors workers make four dollars less an hour than the employees at the Ford dealership down the street.

"We don't see the real reason why they should be paid so different," said Tricker. "The employer won't even address or talk to us about it."

"I understand that maybe to go to full wage parity in one lump sum is maybe a big problem for them but to at least talk about 'how do we get there' over the next three years or longer would at least be negotiating, they're not even doing that," said Tricker.

In November, GAIN Group filed a bargaining in bad faith claim against the union with the British Columbia Labour Relations Board.

"We're hoping they will come to the table and we can negotiate," Tricker said. "I'm pretty sure we can get there."