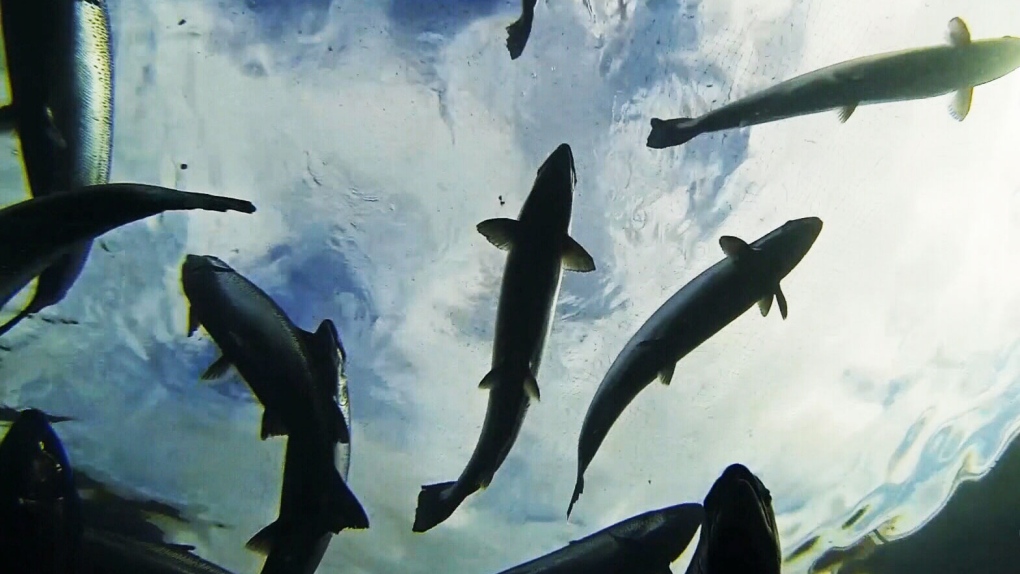 It’s estimated that up to 80 per cent of B.C.’s farmed salmon population is affected by the PRV virus.

Federal government scientists were among 33 members of a peer review panel that looked at the data and risk assessment of piscine orthoreovirus, or PRV.

The virus is highly contagious and often found in fish farms off the B.C. coast, many of which are positioned along wild salmon migration routes.

According to a 2014 summary of facts from the environmental group Ecojustice, PRV was discovered in 2010 and is thought to cause a severe infectious fish disease known as heart and skeletal muscle inflammation.

Ecojustice said the disease was first observed in farmed Atlantic salmon in a single fish farm in Norway in 1999. At the time the summary was released, it said 419 farms were infected with the disease in Norway.

Gilles Olivier, who co-chaired the review for Fisheries and Oceans Canada, said knowledge gaps about the virus include how long it survives and its concentration in the water.

While the virus is causing mortality in fish in Norway, it's not killing British Columbia's sockeye or Atlantic salmon even when it is injected in high doses, Olivier said in a conference call with reporters on Thursday.

“It doesn't seem to have the same effect in our Atlantic salmon here in B.C. than it does in Norway,” he said.

“There is no evidence to suggest that PRV causes disease and mortality in sockeye salmon.”

But the virus cannot be cultured and has a wide geographic distribution ranging from Alaska, to B.C. and into Washington state, Olivier said.

“It's not easy to work with this virus.”

Most of the data comes from Norway, but in B.C. the strain of the virus is not as strong, he said.

Dr. Craig Stephen, who also co-chaired the review, said the research will continue and as more information becomes available the department will take that into consideration.

The Cohen commission investigated the 2009 collapse of the sockeye salmon run in the Fraser River and made 75 recommendations.

The virus risk assessment represents the sixth in a series of 10 assessments arising out of the commission's recommendations.

Correction: The Canadian Press distributed an erroneous report on Feb. 5 that said the Federal Court struck down a Fisheries and Oceans Canada policy on testing for a fish virus and gave the department four months to begin testing young farmed Atlantic salmon. In fact, the Federal Court quashed the policy and gave the department four months to reconsider its decision not to test for the piscine orthoreovirus