An estimated 400 animals are currently entangled in rubbish like packing straps, nets, ropes and wires in the Pacific Rim National Park Reserve alone, according to Vancouver Aquarium researcher Wendy Saniszlo.

She said about 38 per cent of those cases involve plastic packaging bands commonly used for moving.

Other cases saw items so badly embedded in animals’ skin that the type of debris could not be identified.

Last week a team of experts from the aquarium’s Marine Mammal Rescue Centre ventured to the reserve, which runs along the west coast of Vancouver Island, to free a female Steller sea lion from a packing strap that was slowly killing her.

On the way, biologists said they saw six other creatures similarly wrapped in debris.

“We’d like to rescue all of them, but each disentanglement takes an extraordinary amount of time, personnel, boats, gear and drugs,” said head veterinarian Dr. Martin Haulena. “The much better scenario would be for people to be more careful with their trash.”

The aquarium said each individual rescue costs approximately $2,000 and that the team has now freed more than a dozen sea lions.

Haulena said British Columbians can help mitigate the problem by picking up trash from shorelines as well as “losing the loop” when tossing out packing materials, ropes, wire and plastic, such as six-pack rings. 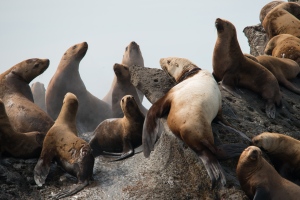