A semi-truck got stuck on the Malahat highway on Tuesday afternoon amid heavy snowfall in the region.

Stewart Westwood with Emcon Services says the semi-truck did not have proper tires on when it started driving up the snow-covered highway. 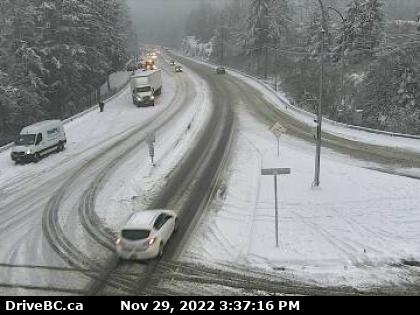 The stuck semi-truck is shown. (DriveBC)

Between Oct. 1 and April 30, semi-trucks must carry and equip tire chains on the Malahat highway when there is snow and ice.

Personal commuter vehicles must have winter tires – marked with either an M+S symbol or snowflake inside of a mountain symbol – during the same time period on the Malahat each year.

Last week, the province said it was planning to perform overnight work on the Malahat near Tunnel Hill.

The work was expected to bring the highway down to single-lane alternating traffic between 11 p.m. on Nov. 29 to 5 a.m. on Nov. 30.

The province says that overnight work may be delayed due to winter conditions. No decision had been made yet as of Tuesday afternoon.

Tuesday's winter storm also affected BC Ferries sailings to and from Vancouver Island, as well as bus schedules in Greater Victoria.

Experts say Canada's plan to increase immigration may ease some pressures in the labour market, but bigger changes are needed to ensure new permanent residents are matched with the jobs that most need filling.

An Alberta First Nation is to sign an agreement today with Ottawa giving it the autonomy to administer its child welfare.

Health Canada is encouraging Canadians to check their cupboards and kitchen tables as the agency has recalled more than 30 types of Indigo-branded items including ceramic mugs, mug ornaments and houseware products due to potential mould contamination.

Authorities in Western Australia on Wednesday recovered a tiny but dangerous radioactive capsule that fell off a truck while being transported along a 1,400-kilometre Outback highway last month in what an official said was like finding the needle in the haystack.

Fear of disappointment? This is why you should say 'no' more

Many people have a hard time saying 'no,' a psychologist says, but the reluctance to let others down has widespread mental health impacts.

'We're all Tyre': Family prepares to lay Nichols to rest

The family of Tyre Nichols plans to lay him to rest on Wednesday, three weeks after he died following a brutal beating by Memphis police after a traffic stop.

Tom Brady retires, insisting this time it's for good

Tom Brady, who won a record seven Super Bowls for New England and Tampa, has announced his retirement.