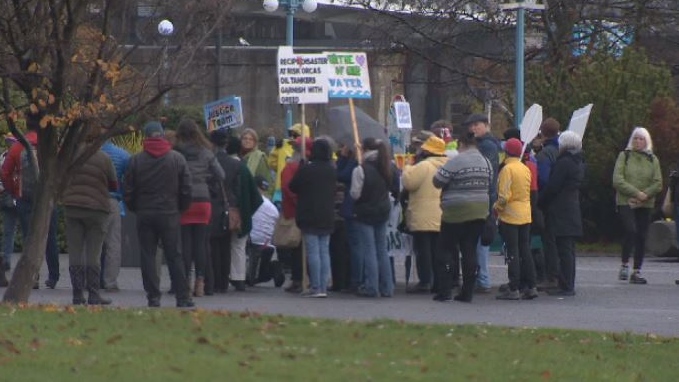 Protesters made up the backdrop for day three of National Energy Board hearings at the Delta Ocean Pointe Hotel in Victoria, B.C. Nov. 28, 2018. (CTV Vancouver Island)

Protesters made up the backdrop for day three of National Energy Board hearings in Victoria.

The hearings are part of the second go-around for the Trans Mountain Pipeline expansion after Canada's top appeals court sent it back to the consultation phase.

Members of both the Tsartlip and Tsawout First Nations spoke in front of the board about their fears for the expansion, which would twin an existing oil pipeline that terminates in Burnaby, B.C.

They fear increased tanker traffic could lead to a spill that would devastate their traditional territories.

"The Haro Strait is in the middle of our territory, and this is one of the main shipping lanes for the super tankers," said Tsawout First Nation Hereditary Chief Eric Pelkey. "And our fishermen and the people that are out there in the water tell us they're terrified of the increased shipping because of the amount of reefs in that area."

Groups of pipeline protesters were present throughout the day outside of the hearings, which are taking place at the Delta Ocean Pointe Resort in Vic West.

The hearings wrap up in Victoria on Tuesday.

Nanaimo will host the next round of consultations beginning Monday, Dec. 3.

Ottawa expects a final report on the process from the NED in early 2019.