Saysutshun Island, or as it was formally known, Newcastle Island, has a rich First Nations heritage going back thousands of years. In more recent times, it has acted as an important economic driver for Nanaimo and Vancouver Island.

Now, it’s a beautiful destination for people who are looking for a day hike or a campsite for the night.

The island is just a seven minute ferry ride away from downtown Nanaimo and when you get there, there’s a good chance you’re going to run into cultural tour guide, Dave Bodaly.

“On the same trail here, our families would walk in a counter-clockwise direction around the island if we had lost a loved one or were sad or something,” said Bodaly.

“Three hours later we come back and we’re renewed and we can carry on with our life again.”

The island itself is 363 hectares in size and the hiking trails are classified as ‘easy.’ To walk the perimeter of the island, it’s about eight kilometres with an elevation of 155-meters at its highest point.

As we begin to walk around the island, it’s hard to miss the pavilion that houses one of only two remaining spring-loaded dance floors left in Western Canada.

Built in 1931, the Canadian Pacific Steamship Company owned the island at the time and turned it into a luxury resort, catering to Vancouver’s elite. But, when the Second World War broke out in 1939, the resort closed due to bankruptcy.

Rosemary Secord has been hiking the island every day for the last six years. She says she appreciates the quiet.

“As you’re walking further down the shoreline trail, you feel like you’re miles from anywhere,” said Secord. “Yet you’re just a seven minute ferry ride from downtown Nanaimo.”

Further down the trail you’ll come to Brownie Bay. At one time it was home to a massive longhouse that was seasonally used by First Nations peoples, during the herring harvest.

“There’s still remnants of where we know the longhouse was located,” said Bodaly. “It’s still in honour of those people who were part of our community, part of Snuneymuxw who lived here.”

While on the topic of Brownie Bay, we should probably talk about how Nanaimo got its name. Bodaly recalls a story about when Captain Vancouver sailed past the bay and into Nanaimo’s harbour. He was greeted by the people living here, in their canoes.

“He said, ‘What place is this?’ And the answer he received was Snuneymuxw,” said Bodaly. “’Oh, Nanaimo.’ That’s how the word was translated and it stuck.”

As we leave Brownie Bay, the next stop is Kanaka Bay. Here’s where things get a bit dark.

Peter Kakua was a Hawaiian labourer who had married a First Nations lady name Que-en. Together they had a daughter.

On Dec. 3, 1868, Que-en told Kakua that she had decided to leave him and take their daughter with her. Kakua left the family home that night and went on a drinking binge. When he returned home later that night, he found his wife, her father and his daughter in the home. He then lost him temper and murdered them all with an axe and fled to the island.

RCMP caught up with him a few days later in the bay. That bay is now called Kanaka Bay and it’s been said that his spirit has been seen wandering the beach at night.

Carrying on to the northern tip of the island, we get to Nares Point, which has amazing oceans views from high up on rock bluffs. Coming back around south to Midden Bay, you truly get the realization of just how close to Nanaimo this island really is.

The next stop on our trip around Saysutshun Island is the sandstone quarries. At one time, the island was a major exporter of sandstone. The sandstone was used in the construction of many local buildings and was even enlisted to build the San Francisco Mint in the 1870’s.

Of course, we couldn’t forget to mention the island’s connection to Nanaimo’s one-time booming coal industry.

“The men that worked in the tunnels that ran from Nanaimo to the island, they could tell what time it was because they could hear the motors of the boats going overtop of them,” said Bodaly. “They said that’s how close they were to the surface, under the rock.”

Saysutshun Island is a beautiful area with an amazing history that is ready for you to explore. Also, if you’re lucky, keep your eyes peeled for a blonde racoon. There are seven that call the island home. 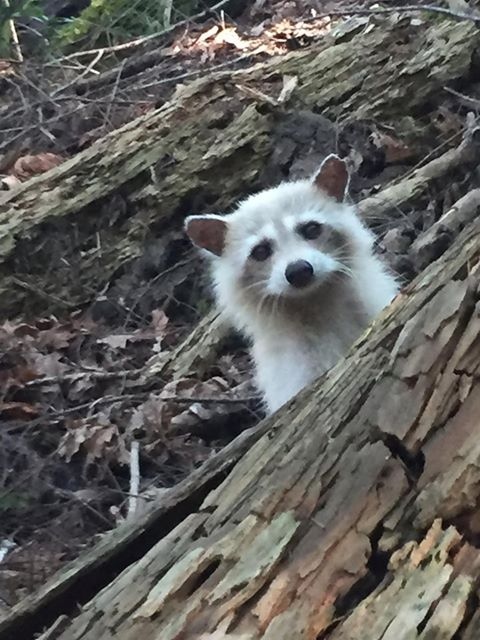