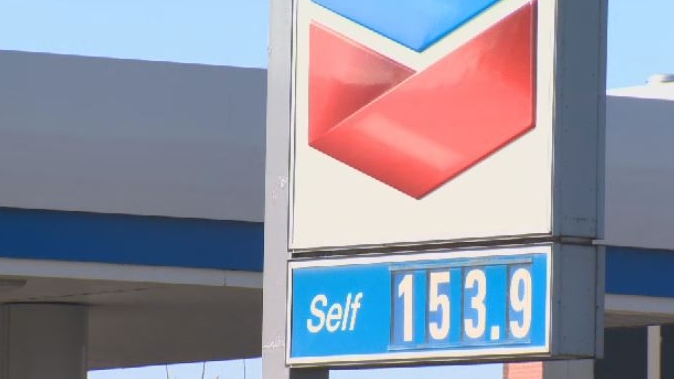 Gas prices in Victoria were already on the rise Wednesday following a pipeline explosion near Prince George, with some stations bumping their costs by 15 cents per litre. Oct. 10, 2018. (CTV Vancouver Island)

Fuel prices have hit their highest levels in the Victoria area since early summer after a natural gas pipeline exploded near Prince George.

According to gas analyst Dan McTeague of GasBuddy.com, prices in the Capital Region are likely to increase even more later this week.

"They are likely, at least their gas stations, will absorb a four-cent increase overnight, and potentially another four cents on Saturday," McTeague said.

He said the reason behind the price increase is the pipeline explosion and rupture in Prince George that has potentially disrupted natural gas service for the majority of FortisBC customers.

"The reality is that most refineries need natural gas to translate oil into gasoline, diesel, jet fuel, and other products. So that’s primarily why we saw this spike," he said.

McTeague said prices in some markets have risen to levels not seen since 2013. In Vancouver, he said he expects prices to hit 161.9 cents per litre by midnight.

He's urging drivers not to panic, saying it appears to be a temporary situation – at least until the pipeline is fixed and natural gas starts flowing again.

"In the meantime, there will be some discomfort at the gas pumps," said McTeague. "Simply because refineries have indicated, three or four yesterday in Washington State, that they’ll have to curtail their output temporarily until this matter is resolved."

But at least for Victoria, he said he doesn't expect prices to climb much higher above $1.53 per litre.

"Those prices are likely not to move too much, again because of the reaction by gas stations to recover their retail margins, their operating margins, which were lost over several days of deep discounting by gas stations competing heavily against each other," McTeague said.

He also said prices could drop just as dramatically as they rose once the pipeline is operational again.

More than 700,000 FortisBC customers have been asked to limit their natural gas use, and are warned that their service could be cut at any moment as a result of the blast.

While the cause of the blast has not been identified, RCMP issued a release Thursday saying it did not appear to be criminal in nature. The investigation into the explosion has been turned over to the Transportation Safety Board with help from the National Energy Board.