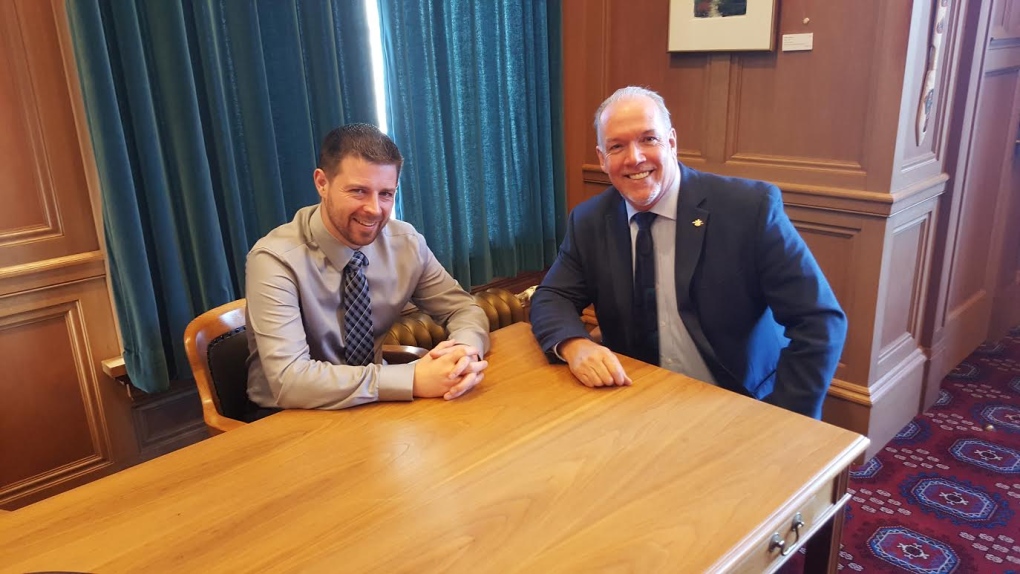 Bryce Casavant, a former BC conservation officer who made headlines for sparing the lives of two bear cubs he was ordered to kill, poses for a photo with BC NDP Leader John Horgan. Jan. 11, 2017. (Twitter/@Bryce_Casavant)

The former B.C. conservation officer famous for refusing to kill two bear cubs says he isn’t dropping out of the NDP nomination race after all – he’s just changing ridings.

Bryce Casavant announced last week he was making a “strategic decision” to withdraw from the nomination race in the Comox Valley, but declined to explain why.

On Wednesday, he announced he would seek the NDP nomination in the riding of Oak Bay-Gordon Head, the same riding currently held by provincial Green Party Leader Andrew Weaver.

Casavant made headlines around the world after he was suspended by the BC Conservation Officer Service for defying orders to kill two bear cubs in 2015.

The cubs were ultimately saved, rehabilitated and released back into the wild last summer.

Casavant was suspended for disobeying orders and later accepted a transfer to the Ministry of Forests, Lands and Natural Resource Operations.

Weaver released a statement Wednesday congratulating Casavant on being appointed to run in Oak Bay-Gordon Head.

“This riding cares deeply about local representation, as was demonstrated by the exceptionally high voter turnout in 2013,” he said. “I look forward to a lively campaign and wish him well."

Yes. I will be running for the #bcndp in Oak Bay - Gordon Head. Looking forward to helping the #bcndp form a new gov. #bcpoli